Happy Saturday! :) You have 14 days 10 hours 5 minutes until Christmas!

A recap of last week (4-10 Dec) across the World shows the U.S. trending +0.8F warmer than last year, 6th warmest in 37 years with above average national temperatures. The West and Northern-tier was the cold spot. Rainfall was 29% drier than last year, 15th driest of the past 37 years and snowfall was down 41%, 14th least in 37 years. CLICK ON IMAGES FOR A LARGER VIEW. 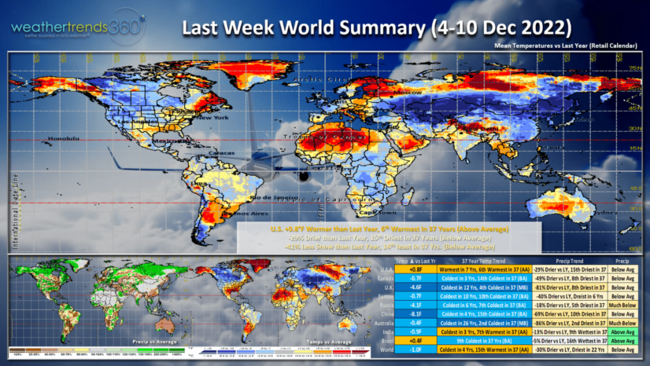 Season-to-date snowfall has now dipped 11% below average for the U.S., but still +82% more than last year's very low snow totals. We'll be adding to these totals in the 2-weeks leading up to Christmas with a snowier pattern setting up. 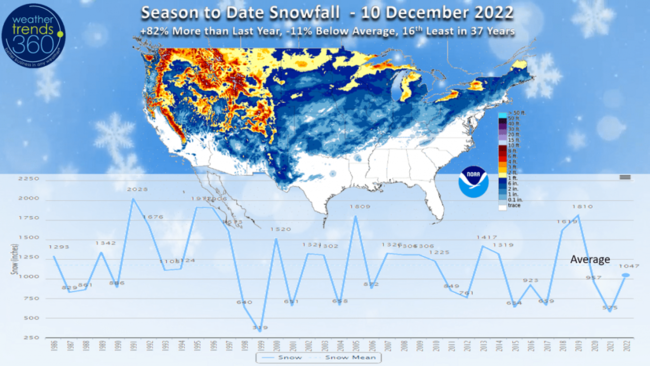 Dry-to-Drought phases have improved 6% over the past few weeks, but 79% of the country is still in dry to drought phases, the most in 22+ years and well above the average of 49%. 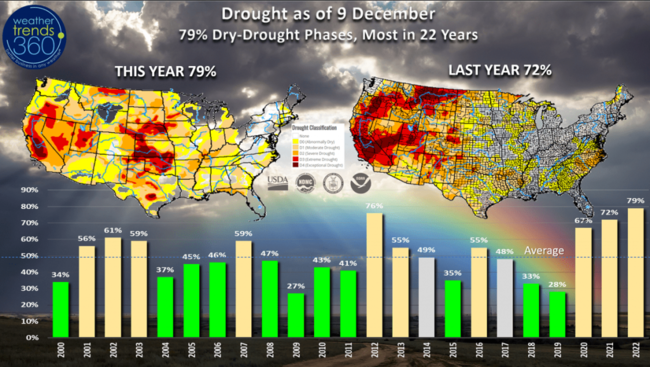 The 3-year La Nina cycle that has been the biggest catalyst for the 3-year drought cycle is already showing signs of collapsing as warmer Equatorial Pacific Ocean water temperatures begin to develop. Most models show an El Nino cycle by Summer 2023 and this event is very likely going to bring substantial widespread rain and flooding to both the U.S. and South America. 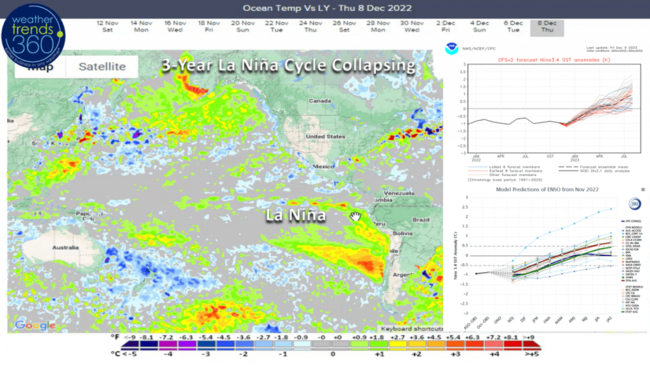 In the near term, the Polar Vortex will play a role as it's on the weaker side with two to three circulations as opposed to one stronger vortex. This will allow colder Arctic air to invade the lower latitudes of the Northern Hemisphere. 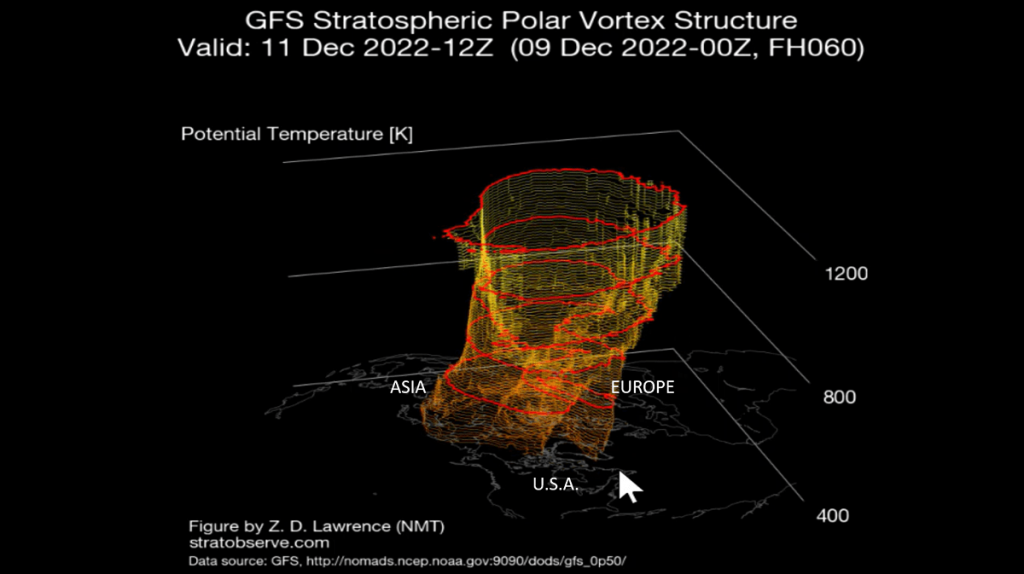 The next two weeks leading up to Christmas in the U.S. will trend the coldest and snowiest in 6 years. This will continue to drive strong seasonal category sales with on-line purchases particularly strong with the inclement pattern impacting store traffic. 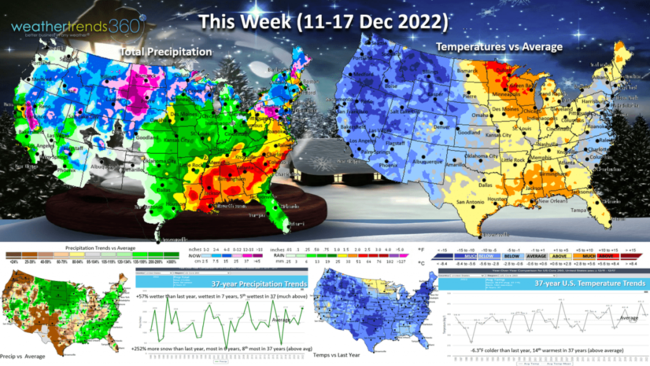 This week (11-17 Dec) shows the cold invading the West and glancing shots in the East. The U.S. overall trends -6.3F colder than last year, but still 14th warmest of the past 37 years. Rainfall is up +57% and the most in 37 years while snowfall is also up +252% more than a year ago, most in 6 years and 8th most of the past 37 years. The first accumulating snows of the season are possible from the Philadelphia to Boston corridor. Seasonal sales likely to have a substantial increase after the milder week last week.

The 6-day snowfall forecast shows several snowstorms impacting 53% of the country. Snow totals expected to be +163% more than last year, +51% above average and 9th most of the past 37 years. 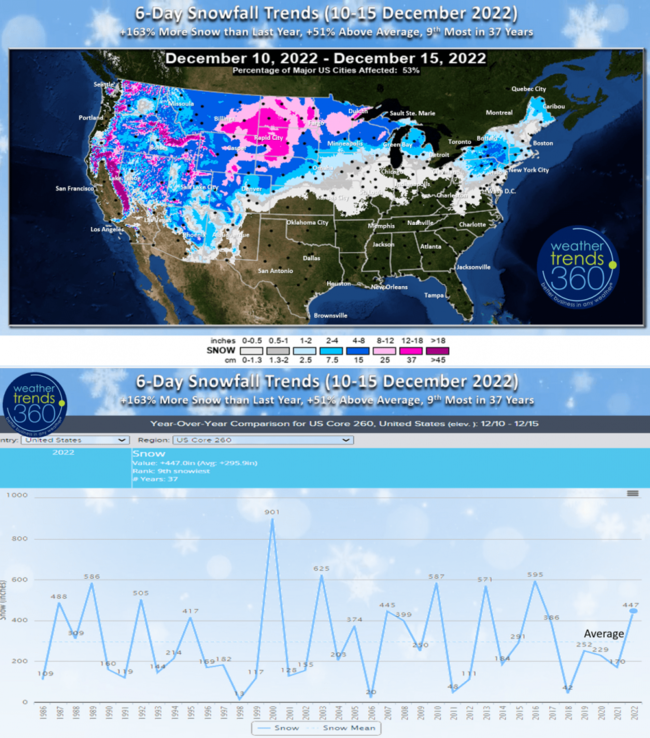 Next week (18-24 Dec) is the last 7 days of the holiday shopping season before Christmas on Sunday. COLD is the theme with the U.S. trending a very significant -8.1F colder than last year, coldest in 18 years and 8th coldest in 37 years with well below average national temperatures. 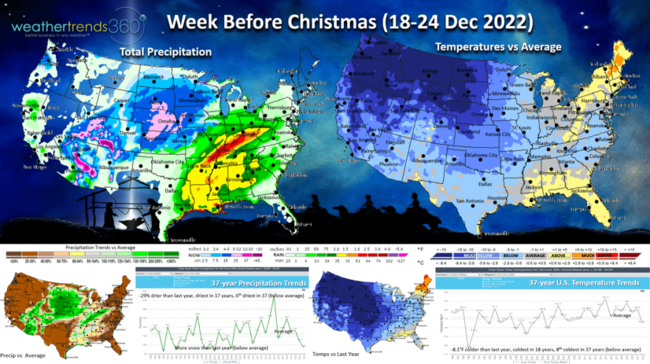 National rainfall is likely to be stormier than the Euro is indicating (the Euro short range model has been to dry a times this Fall) with a bigger snowstorm from the Southern Rockies into the Midwest with heavier rain in the South Central U.S. This colder snowier pattern benefits on-line retailers with fast delivery and can have a negative impact on store traffic, especially open air/strip mall type centers. Mall based stores can fare a bit better. 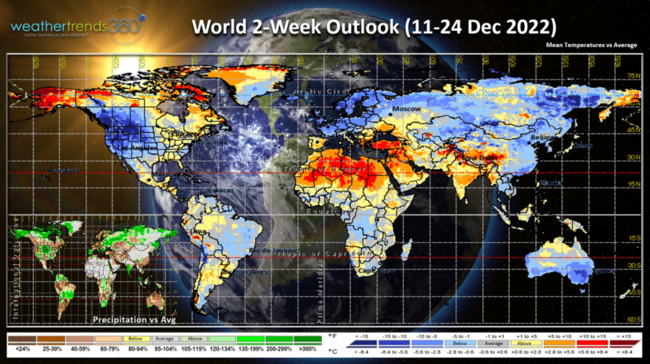 The 2-week World Outlook (18-24 Dec) shows continued cold trends across much of the U.S., Europe, Russia, China and Australia.