The last few days of Summer coming to an end.

We share a memorable story on how General "Stormin" Norman Schwarzkopf saved the Queen some 31 years ago at MacDill AFB, Tampa Florida...then LT Kirk remembers the day well - see video for the fun story. CLICK ON IMAGES FOR A LARGER VIEW. 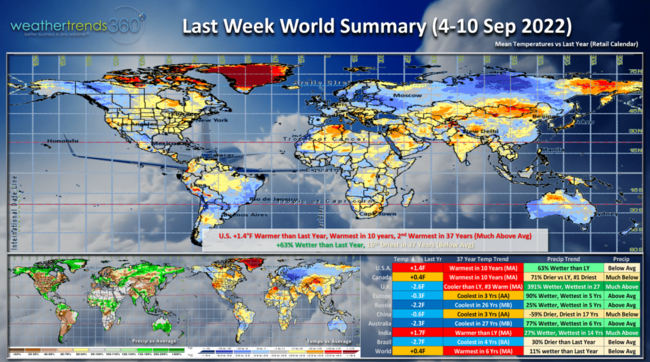 Last week (4-10 Sep) across the World shows the U.S. trending +1.4F warmer than last year, warmest in 10 years and 2nd warmest in 37 years for the U.S. overall. Rainfall was actually up +63% wetter than last year, but still 16th driest of the past 37 year. The really cold spots were in Russia - coldest in 26 years and the end of Australia's Winter - coldest in 27 years. 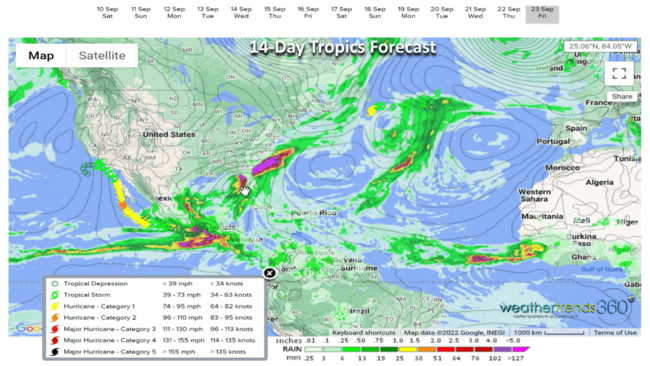 The tropics were active in both the Pacific and Atlantic with Tropical Storm Kay impacting Southern California with some flooding and near hurricane force wind gusts in the higher terrain East of San Diego. Bermuda dodged a bullet with Major Cat 3 Hurricane Earl passing to the East of the Island keeping the devastating right front quadrant away from the Island. Need to watch the tropics as models hint at some development late next week for the NE Gulf of Mexic0 - one of our most favored areas. 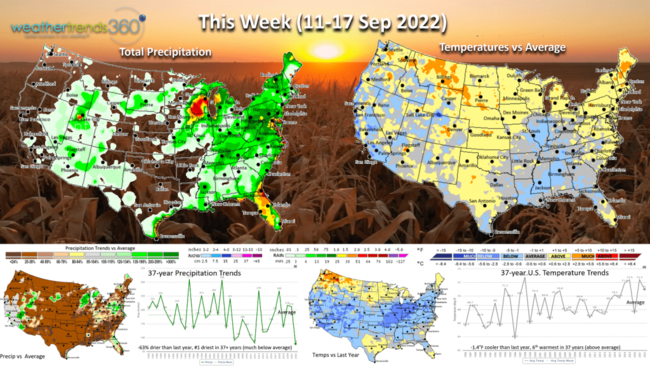 This week (11-17 Sep) finally shows relief from the heat wave in the West. The U.S. overall trends -1.4F cooler than last year, but still 6th warmest of the past 37 years. Rainfall still way down, 63% drier than last year and #1 driest in 37 years for the U.S. overall with well below average rainfall. This is classic La Nina which will linger for a few more months before finally decaying as we go into 2023. 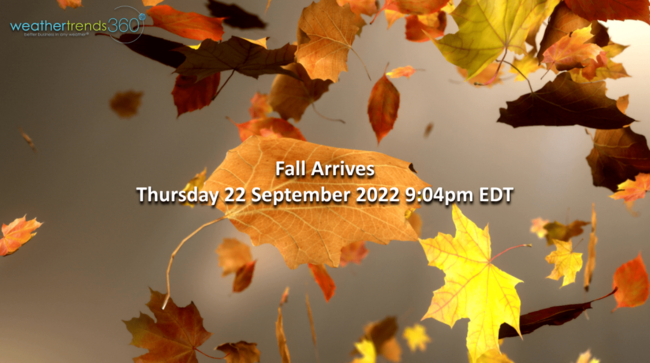 Fall officially arrives 22 September at 9:04pm EDT, the weather doesn't look like it will cooperate with continued challenging conditions for back2school and cool weather merchandise. 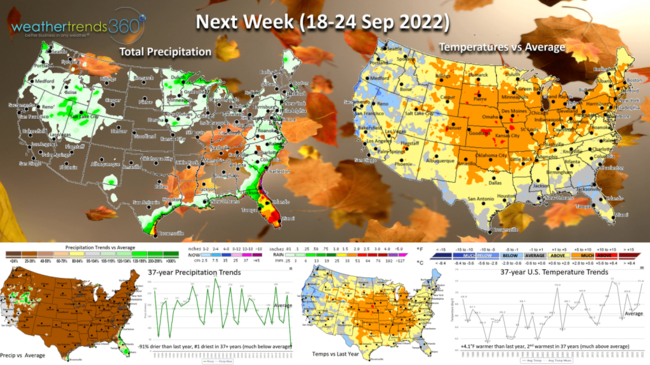 Next week (18-24 Sep) The U.S. trends +4.1F warmer than last year, warmest in 6 years and 2nd warmest in 37 years. Consumer will certainly be in a Summer mind-set which negatively influences early Fall seasonal merchandise. It's also 91% drier than last year making it the #1 driest in 37 years. This might be a bit overdone as the tropics look to be threatening the Southeastern U.S. late in the period. It is the peak of the hurricane season and still likely the U.S. has some major threats over the next couple months. 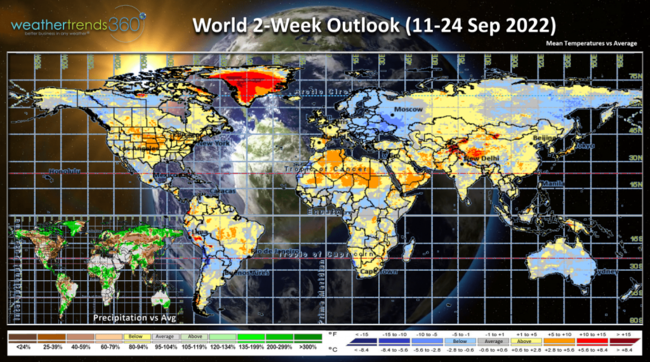 The World 2-week outlook (11-24 Sep) period shows more of the same with very warm conditions across North America, cooler in Eastern Europe, SW Russia and Australia. These are not favorable trends for early Fall merchandise other than hot Summer consumable categories.

I like to call it the day General "Stormin" Norman Schwarzkopf saved the Queen...with a little help from a wing weather officer named Lt. Kirk at 3am 20 May 1991. It was the 4th and last time I met the world famous general as he walked around Hangar 3 at MacDill AFB Tampa Florida in the pre-dawn hours before he would be Knighted by the Queen of England. Det 32 weather operations was in Hangar 3 where a young LT Kirk was on the mid-shift that memorable morning. He strolled in, full dress uniform, and said "good morning lieutenant, just looking for an update on the sea fog for today's ceremony." I said, "good morning General, SIR." He smiled and said, "I'm not a SIR yet LT." I gave him the minute-by-minute forecast that the sea fog would roll out minutes before the Queen would arrive, but that it would be slippery before the sun would break out for a beautiful ceremony." He said, "thank you LT." I said, "God Bless you Sir." He smiled and that was the last time I would see him until 16 years later to "get the rest of the story." 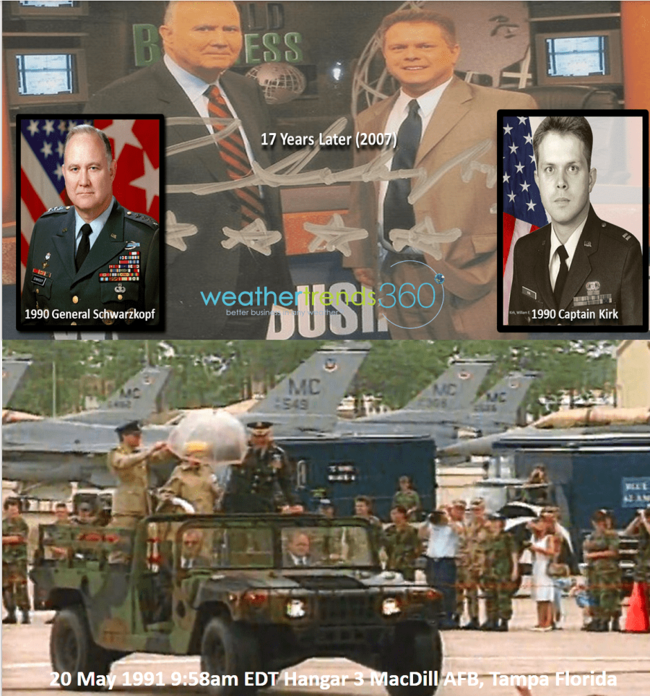 On that day, the Queen arrived Tampa Bay via the British Yacht Britannic and then entered a limousine for MacDill AFB where the General greeted her with umbrella in hand as the sea fog moved out, the mist ended and the sun was breaking out. As she got out of the limousine she slipped, and despite being told not to touch the Queen, he did and in a swan like move gently put his arm under her arm, pivoted her to the tarmac, umbrella in hand and saved the Queen from slipping on that memorable day. From there they got into a military jeep on their way to Hangar 3 for the Knighting ceremony.

The next and last time I met the General was 16 years later (2007), we're both civilians, when I said to him, "I know you don't remember me General, but..." when he interrupted me and said, "actually I do, let me tell you the rest of the story with the Queen." I laughed, as those were the next words I was going to say. The general said on a trip years later to London when he met the Queen a second time, she showed him a scrapbook she made of that memorable day at MacDill. She told the General that her Royal Entourage disposed of all the "inappropriate and unfortunate photos" while on the trip back to England from the U.S., but she demanded, "I want all those photos of the General saving me from falling." The General told this story with passion and a smile. I joked, the day you saved the Queen General! We pray for the Queen and her family; anyone that met her knows she was truly a caring soul.