The unusual climate cycle we're in (3rd year La Niña, Cold -PDO, warm +AMO) is an event that's only happened twice in the past 157 years, they're playing a major role in our weather with droughts in the U.S., very warm weather in Europe and very cold conditions in the Southern Hemisphere. CLICK ON IMAGES FOR A LARGER VIEW. 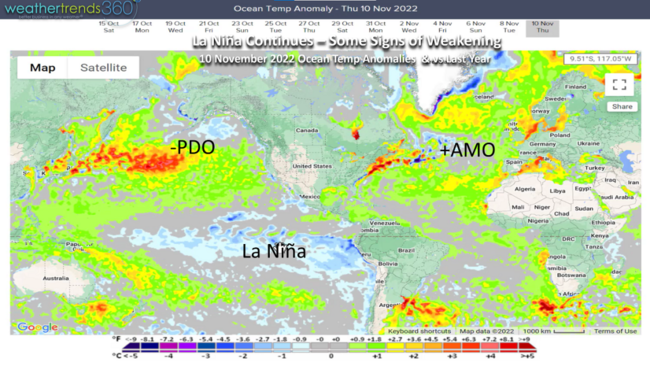 La Niña (colder than average Equatorial Pacific Ocean) is nearing its peak and already showing signs of weakening. By Summer 2023 into much of 2024 the discussion won't be on droughts but rather floods! 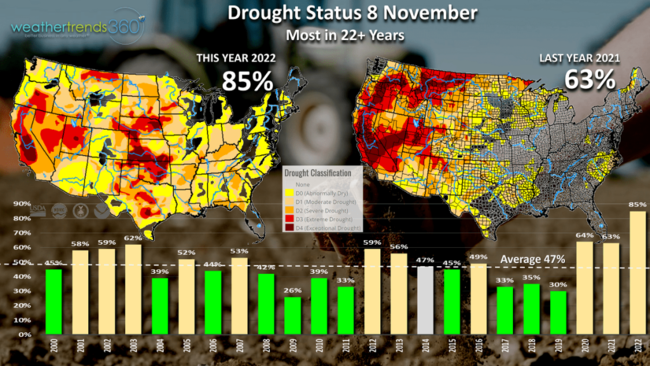 Drought status across the U.S. is at a near record level in terms of geographic coverage in large part to this cycle. 85% of the country is currently in dry to drought phases, compared to 63% last year and 47% average. This cycle will be showing a big wet pattern this time next year. 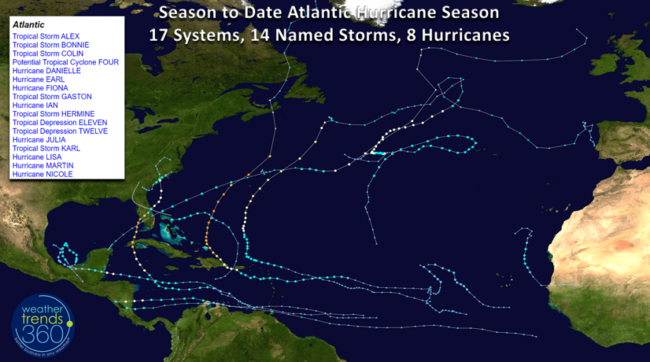 Hurricane (CAT 1) Nicole made landfall near Vero Beach, Florida this past week, bringing the seasonal totals to 17 systems, 14 named storms and 8 hurricanes. Florida was clearly the hardest hit area this season with hurricanes IAN and NICOLE. The season ends 30 November. 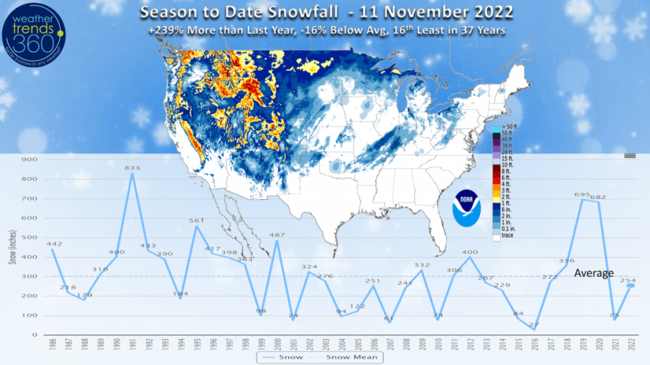 Snowfall so far this season is up +239% more than last year but still -16% below average and 16th least of the 37 years. November is currently trending the snowiest in 3 years and above average. 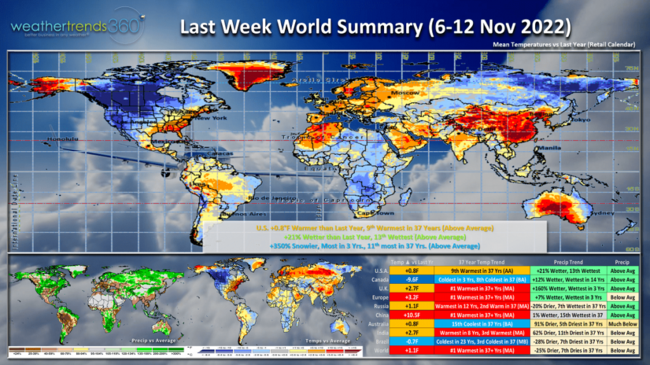 Last Week (6-12 Nov) across the World shows a major cold snap starting to invade Western North America while the East was very warm. The U.S. overall trending +0.8F warmer than last year and 9th warmest of the past 37 years. Rainfall was +21% more than last year, 13th wettest of the past 37 years due in large part to landfalling hurricane Nicole and the heavy rain in the West. Snowfall was +350% more than last year, most in 3 years and 11th most in 37 years. The West was clearly the big winner for Winter seasonal merchandise sales. Europe, U.K. and China were all near record warm which hurts overall Fall sales but benefits cold seasonal categories and helps to reduce heating demand. 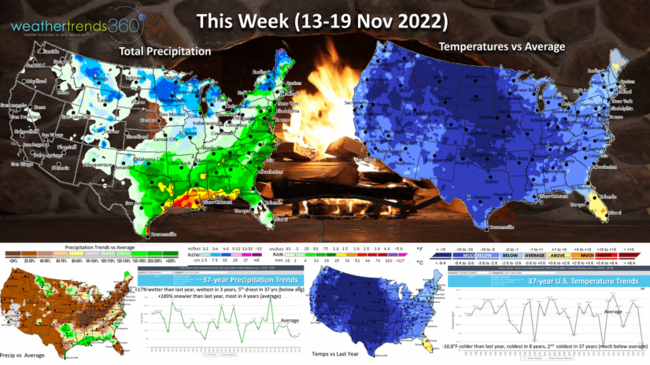 This Week (13-19 Nov) shows the entire U.S. in the grips of a major cold snap with the U.S. trending -10.8F colder than last year, coldest in 8 years and 2nd coldest in 37 years. This is an exceptional period for Fall-Winter merchandise sales at higher margins. Rainfall is +17% more than a year ago, wettest in 3 years but still 5th driest in 37 years with much below average national rainfall. Snowfall is again up +189% over last year, most in 4 years with near average national snowfall, mainly in the Northern Rockies, Upper Midwest and part of the Great Lakes into New England. 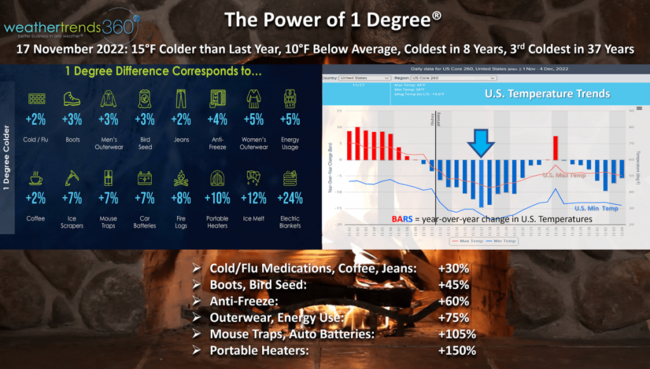 Applying Weather Trends' Power of 1 Degree on seasonal sales, the lift will be very significant for all Fall, even Winter seasonal items. Thursday (17 Nov) looks to be the peak of the intense cold with the nation trending a whopping 15F colder than a year ago. Every 1F colder there is a 5% increase in Fall outerwear and also a 5% increase in heating demand. 5% x 15 = +75% increase in these items. Volatile categories like portable heaters can have a spike as much as +150% just due to the major colder weather trends. 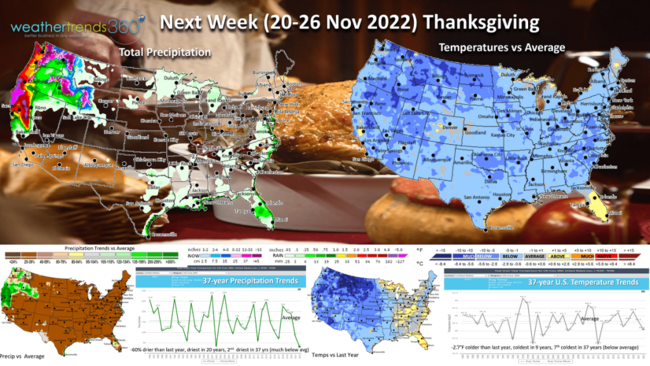 Next Week (20-26 Nov) Thanksgiving Week shows cold continuing, with some moderation. The U.S. is still -2.7F colder than last year, coldest in 9 years and 7th coldest in 37 years. This will certainly lead to extra pantry loading as consumers flock to the stores in preparation of Thanksgiving. Rainfall is dry for 90% of the country, with only the West Coast having stormier conditions. Nationally rainfall is down -60% vs last year, driest in 20 years and 2nd driest in 37 years with snow limited to the higher Sierras in California. 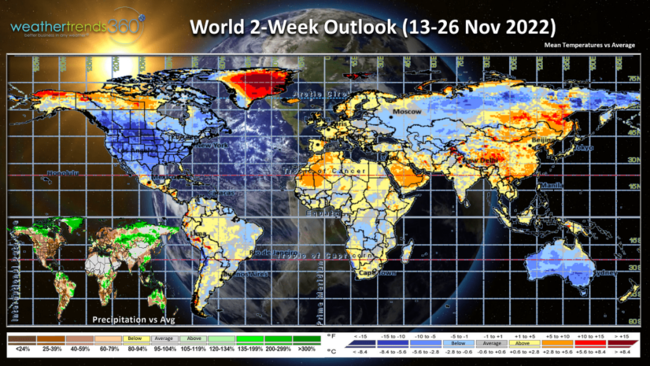 The 2-week World Outlook (13-26 Nov) shows the U.S. and Canada having the most ideal trends for Fall seasonal merchandise sales while Europe and China remain warm. Australia looks to continue their cool Spring trends.