We are half way through Meteorological Winter (1 Dec - 28 Feb) and it's been a wild down and up pattern. CLICK ON IMAGES FOR A LARGER VIEW. 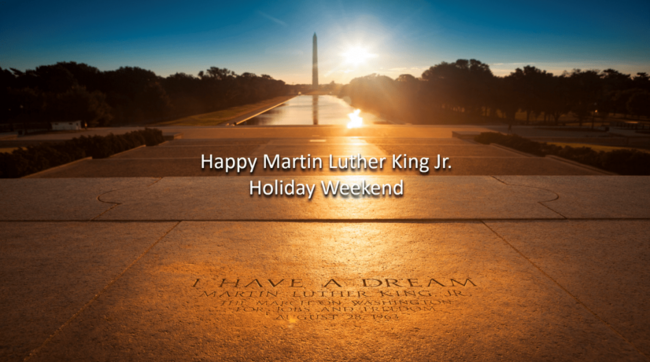 It was the coldest December in 5 years nationally with below average temperatures, now followed by the warmest January in 17 years. Winter overall to date is trending -1.9F colder than last year, coldest in 5 years but still 10th warmest in 38 years with above average national temperatures. Rainfall is +17% wetter than last year, wettest in 3 years and 10th wettest of the past 38 years (above average). Snowfall is -1% vs last year, 12th least in 38 years (below average). 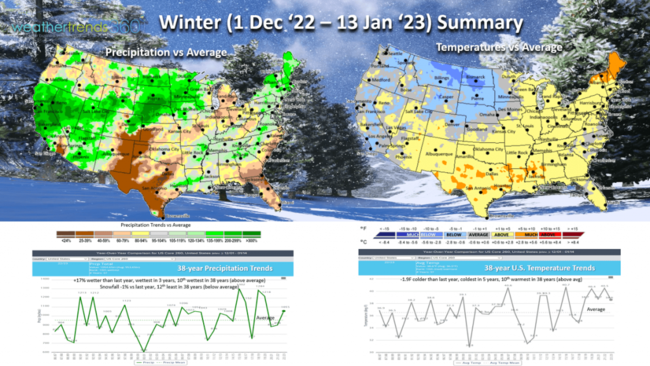 The U.S. year-over-year temperature trends for Winter show the HUGE plunge in temperatures in middle December leading up to one of the coldest Christmas in 127 years for much of the U.S. That has transitioned to the warmest front half of January in 17 years. February not likely to be as extremely warm, but still milder than last year followed by a colder and snowier March. Weather Trends Power of 1F technology would suggest exceptional sales gains for Winter merchandise in December but now bigger declines in seasonal sales here in January. 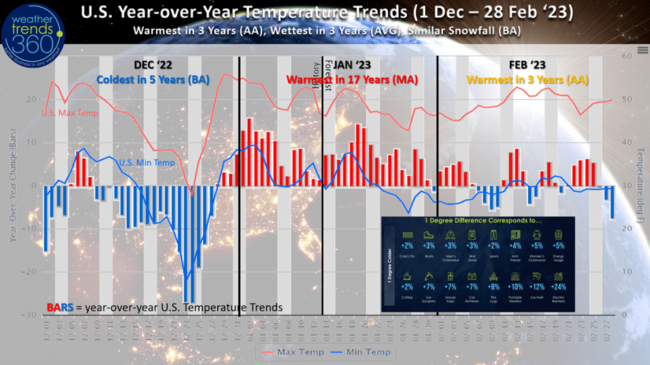 Season-to-date snowfall (1 Sept - 13 Jan) is still showing +32% more snow than last season, most in 3 years but -12% below average and 12th least of the past 38 years nationally. The big winners continue to be the Sierras of California, the Rocky Mountains and downwind of the Great Lakes. 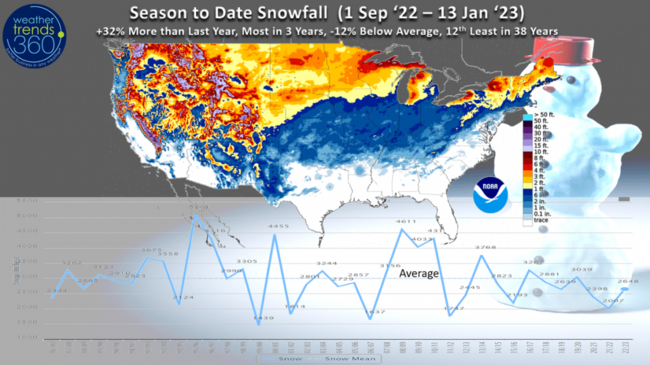 These trends will continue to get less as we go through the balance of January which doesn't appear to by overly snowy for population areas. 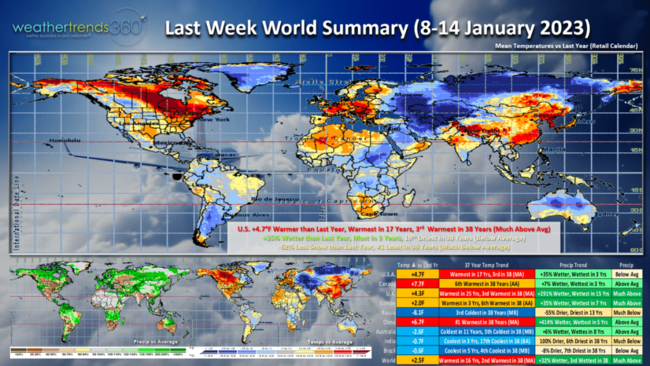 Last week (8-14 Jan) across the World shows the U.S. trending +4.7F warmer than last year, warmest in 17 years and 3rd warmest of the past 38 years. Rainfall was up +35% vs a year ago, most in 3 years but 19th driest of the past 38 years with slightly below average rainfall. The West and East Coast were the wet spots. Snowfall was -62% less than a year ago nationally and #1 least in 38 years. Don't tell that to folks in the high mountains of the West where feet of snow have been falling.

Canada, U.K., Europe, and China were all much warmer than a year ago with the Polar Vortex keeping Russia in the Deep Freeze - 3rd coldest in 38 years. The cool trends continue for Brazil and Australia (their Summer). 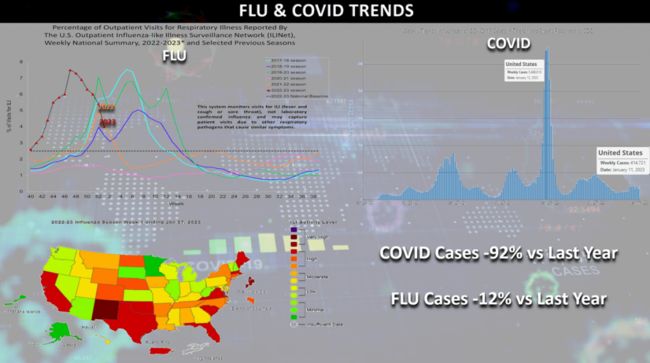 Last year we had the huge COVID Omicron spike and a peaking Type A FLU season, but this year COVID cases are down approximately -92% vs this time last year and FLU is now down -12% vs last year after a very early FLU spike more similar of 2009. 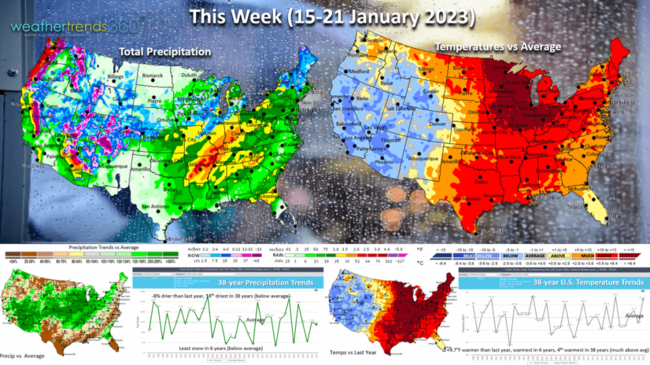 This week (15-21 Jan) shows more wintry conditions for the Western third of the country while the Eastern half remains very mild and damp vs white. U.S. trends +9.7F warmer than last year, warmest in 6 years and 4th warmest of the past 38 years with much above average national temperatures. This is good for store traffic, but a huge negative for seasonal merchandise sales. Rainfall down -8% vs last year and 14th driest of the past 38 years despite widespread light to moderate rainfall. The drought parched Central U.S. starting to get some relief. Snowfall the least in 6 years despite the heavy mountain snows out West. 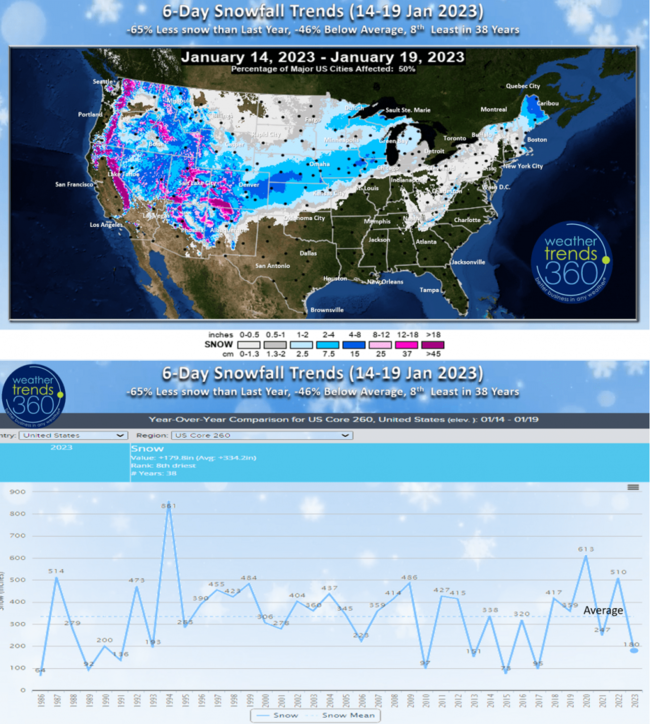 The 6-day snowfall trends (14-19 Jan) show -65% less snow than last year, -46% below average and 8th least of the past 38 years. A late week system will bring some moderate snowfall from Colorado to Wisconsin. 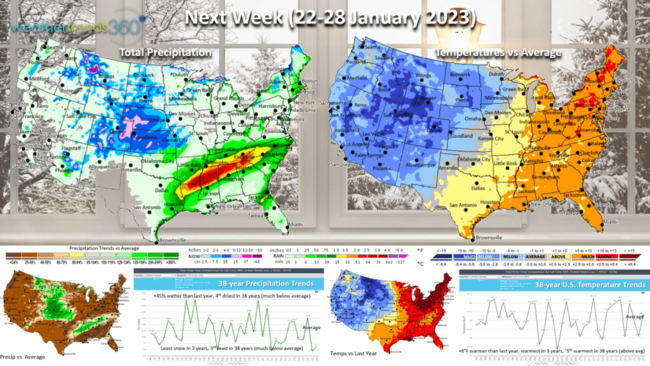 Next Week (22-28 Jan) shows some signs of a moderating weather pattern with expanding cold into the North Central U.S. The U.S. overall still trends +6F warmer than last year, warmest in 3 years and 5th warmest of the past 38 years. Still much above average temperatures in the Northeast. Rainfall +45% more than a year ago but still 4th driest of the past 38 years as the parade of West Coast storms appears to take a much needed break for flooded California. Snowfall the least in 3 years, 3rd least in 38 years nationally. 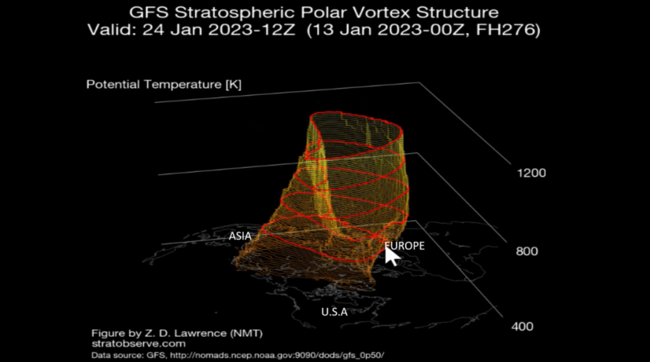 The Polar Vortex remains strong but showing signs of elongating which allows the cold Arctic air to expand. For now that expansions of cold air appears headed for Eastern Russia/Siberia, China and Greenland. 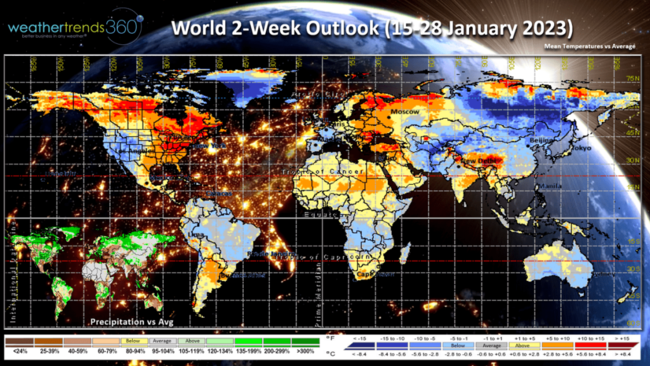 The 2-week World Outlook (15-28 Jan) shows the influence of the Polar Vortex headed toward Asia as opposed to North America. The colder weather in the Western U.S. not related to the stretching PV.