We're in the final stretch to Christmas with less than a week to go, and the weather is gearing up to make it a wild one across the United States. Last minute holiday shoppers may be in a scramble to get the shopping done as conditions turn downright nasty in the final shopping days before Christmas.

A massive surge of Arctic air descends on the U.S. this week bringing below temperatures from the Northwest and down across the eastern 2/3rds of the nation. By week's end, we could see freezing temperatures as far south as the Gulf Coast. Santa may need an extra layer of two this year! This will be the coldest week prior to Christmas in 22 years and the 3rd coldest in 37 years, nationally. 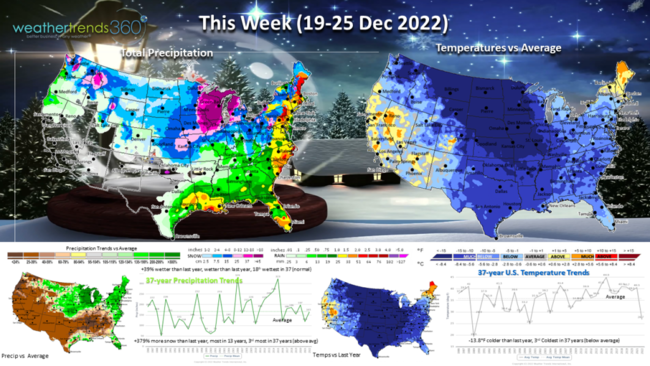 The other big story will be a major winter storm in the Thursday-Saturday time frame. There has been a lot of changes in the track of this storm over the past weekend, so there is still uncertainty as to who will see snow and who will see rain, but rest assured, someone will be dealing with blizzard conditions by the time the week is through. The snowfall amounts on the map below are likely to change over the next several days. A shift east or west in the track of the storm will shift the rain/snow line and area of heaviest snow. The biggest concern right now is for the major airport hub of Chicago to see a highly impactful storm, this could snarl air traffic later this week. 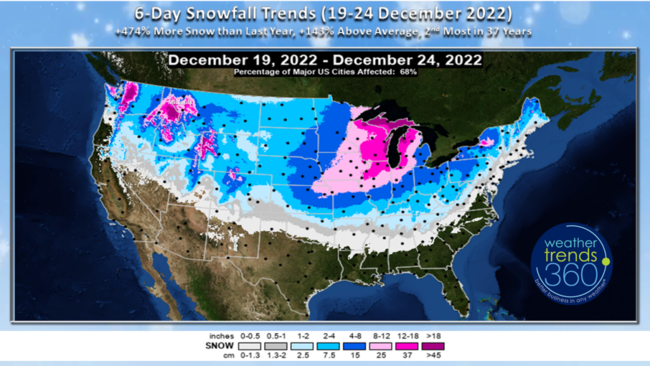 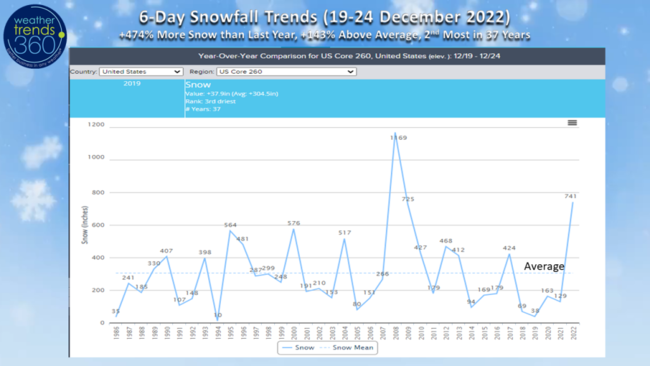 As of Monday morning (12/19/22), the forecast models favor wintry precipitation across parts of the Plains to the Midwest and Great Lakes. The storm is expected to intensify as it moves over the area and could bring very strong winds and blizzard conditions across the region. Although it's too early to pin down exact location and snowfall total amounts, there is a good chance someone sees 1-2' from this monster storm. The storm will also usher in a reinforcing shot of cold air that could bring freezing temperatures to the Gulf Coast. The cold could threaten fruit crops in Florida, and there could be issues with burst pipes in the South.

Strong winds and heavy rain will make travel on the East Coast miserable but not impossible. At this time, frozen precipitation looks to be reserved to interior portions of the Northeast. However, even for folks flying out of the major cities along the I-95 corridor, flight delays and cancellations are likely as the storm likely disrupts major hubs, like Chicago. If you can change your flight plans to earlier this week or early next week, that may alleviate some headaches. This storm will definitely cause travel problems, so keep that in mind if you are traveling later this week and plan to pack a little extra patience. For flights that do get off the ground, it could be quite a bumpy ride, so motion sickness prone travelers beware.

With the winter storm and subsequent push of cold, arctic air, the chance of there being a 'White Christmas' this year is high for a good portion of the Plains, Midwest, Great Lakes, even into parts of the Mid-South. The map below shows the probability of having a 'White Christmas', which is defined as having at least 1'' of snow on the ground Christmas Day. 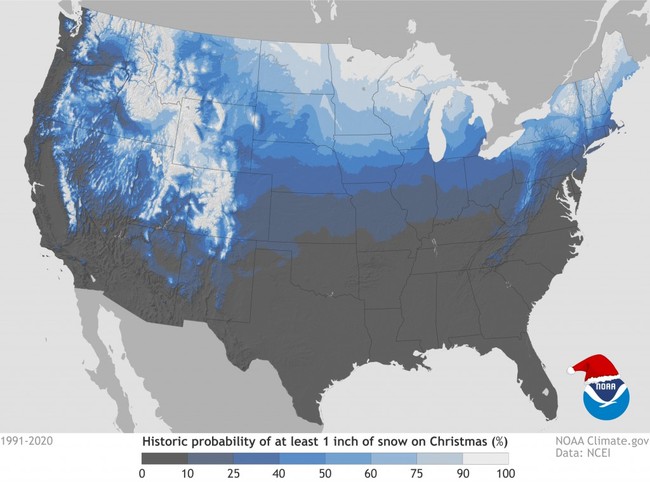 Christmas Day itself is looking fairly dry across the nation although there will be some lake effect snow downwind of the Great Lakes and possibly some wet weather in the Pacific Northwest. It will be a cold day in the East, a nice day to cozy up by the fireplace! 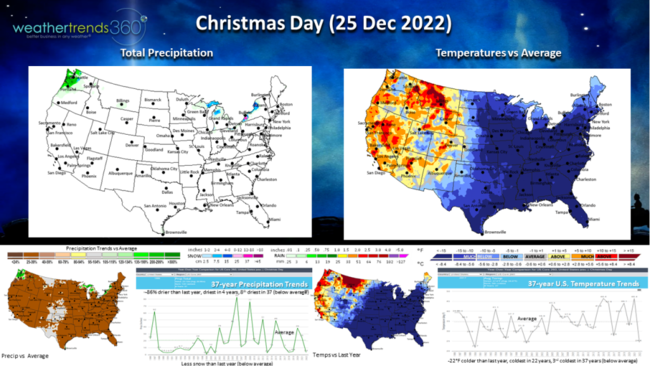 On behalf of the entire team here at WeatherTrends360, wishing you a warm, healthy, and happy holiday!