A recap of last week (15-21 May) across the World shows a hot/dry week in the U.S. with the nation trending +1.1F warmer that last year, warmest in 4 years and 4th warmest in 37 years with much above average national temperatures. Hot spots were from the Southwest to the Northeast while the Northwest remained cold. Rainfall was down -33% vs last year, driest in 8 years and 7th driest in 37 years with below average rainfall. These are very favorable trends for stronger year-over-years seasonal sales gains. CLICK ON IMAGES FOR A LARGER VIEW. 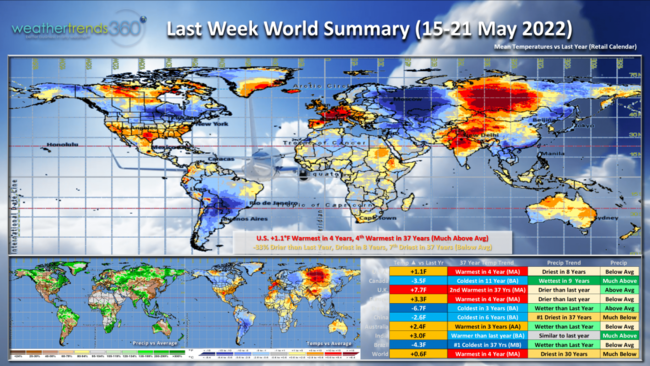 Not so lucky up in Canada where it was the coldest in 11 years and wettest in 9 years, negative for seasonal sales. The U.K. continued their very favorable trends with the 2nd hottest middle May period in 37 years; also best in 4 years for Europe. Brazil was the coldest in over 37 years. 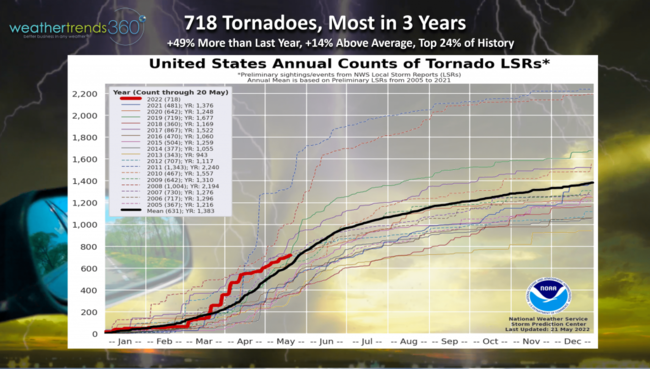 More severe weather in the U.S. with tornadoes continuing to add up. 718 so far this year, up +49% vs last year, +14% above average and in the top 24% of history. These severe trends very likely to continue all Summer long. 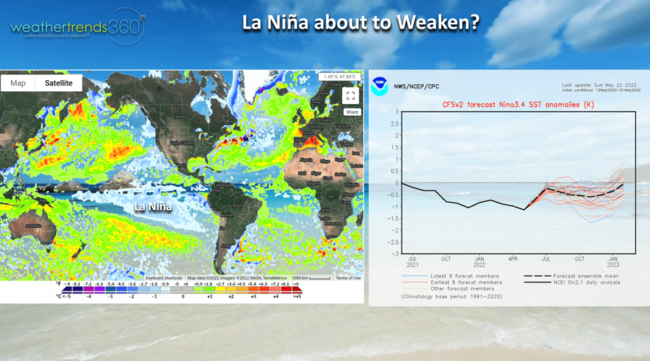 One cycle that appears it might be about to weaken is La Nina, colder than average Equatorial Pacific Ocean. Still a moderate event right now but weather patterns are starting to suggest a change is taking place. WTI expects an El Nino event next year, possibly becoming a strong even late next year into 2024. This will dramatically alter the weather patterns around the World. 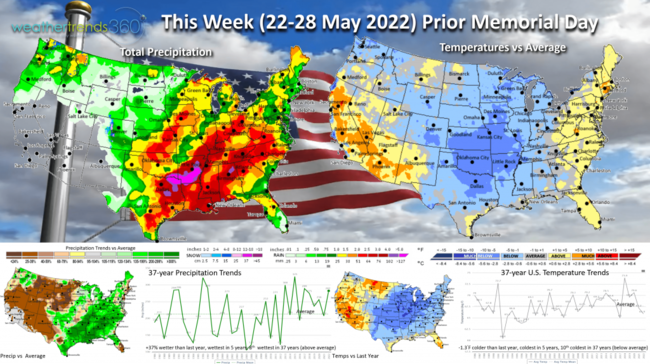 This Week (22-28 May) for the week before Memorial Day weekend, shows a cool start but a big warm up for the Eastern 2/3rds of the country as we approach the holiday weekend. For the U.S. overall, the week looks to trend -1.3F cooler than last year, coolest in 5 years and 10th coolest of the past 37 years with below average national temperatures. Rainfall+37% more than a year ago, wettest in 5 years and 8th wettest of the past 37 years. More widespread risk for severe thunderstorms and tornadoes in the Central U.S. and spilling into the Southeast. 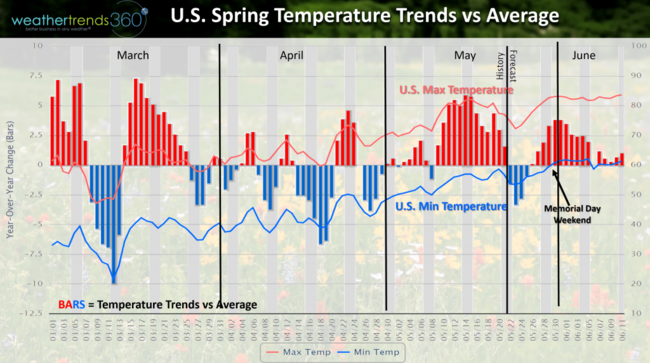 The U.S. temperature trends this Spring show the up and down volatility and another brief cool snap this week before much warmer temperatures return well in advance of the Memorial Day holiday weekend. This should be a much more favorable holiday for seasonal sales over last year with better weather conditions. 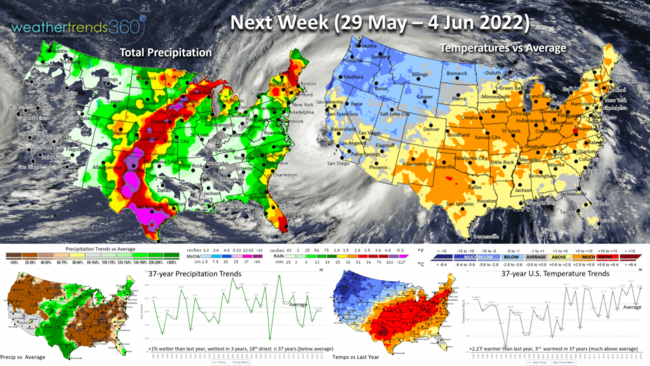 Next Week (29 May - 4 Jun) is the official start of the 2022 Atlantic Basin Hurricane Season. wt360 expects 20 named storms for another much above average hurricane season. Still high risk for Florida and the Northern Middle Atlantic-Southern Northeast. This will likely be the last in a series of active seasons with El Nino like conditions in 2023 more likely to suppress next year's activity. NOT THIS YEAR!

For the U.S. overall the week looks to trend +2.2F warmer than last year and 3rd warmest of the past 37 years with much above average national temperatures especially from New Mexico to the Northeast. Yup...more cold conditions in the Northwest. Rainfall up a tad of last year, wettest in 3 years but still 18th driest of the past 37 years with slightly below average national rainfall. More severe weather threats a bit further West in the parched areas of the Plains. 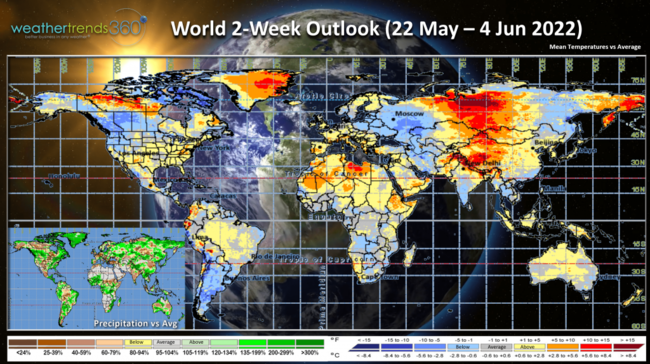