The 3-major climate drivers right now are the 3 oceanic cycles (year 3 La Niña, -PDO very strong cold phase, +AMO warm phase) which have only teamed up twice in the past 157 years. La Niña likely to peak here as Winter starts and then after 3-years, finally begin to fade and transition to a neutral phase by late Winter and possibly El Niño mid to late Summer next year. CLICK ON IMAGES FOR A LARGER VIEW.

The changes globally over the next 12 months are going to be wildly different with wet and flooding shifting to the Americas-Europe while dry and droughts shift to Asia-India. For now, the very dry cycle for the Northern Hemisphere continues. 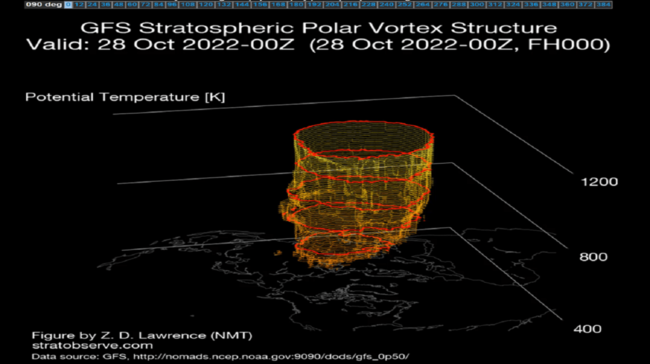 The more near-term atmospheric feature to play a major role in our Winter ahead is the Polar Vortex which currently is relatively strong and symmetrical with an occasional wobble. The stronger it is, like last Winter, the more likely the cold stays bottled up in the Arctic. WTI expect December to bring colder and snowier conditions to the U.S. with some brief weakening from the PV. 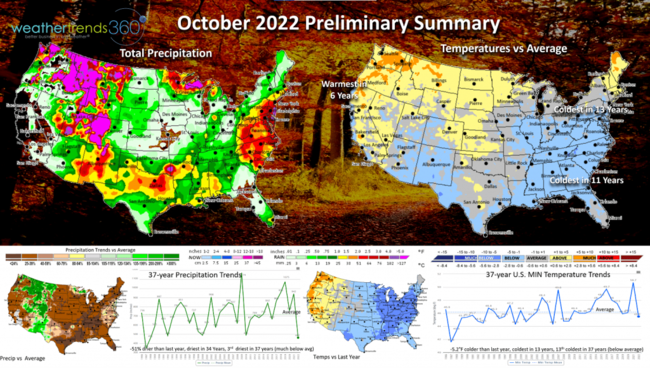 October is almost in the history books and it was a much colder month for many areas of the U.S. The U.S. overall trended -5.2F colder than last year, coldest in 13 years and 13th coldest of the past 37 years with below average national temperatures. This was a very strong trend for Fall seasonal merchandise sales. The cold started in the East early and now has shifted late month into the West after a hot start. Rainfall was -51% drier than last year, driest in 34 years and 3rd driest in 37 years with much below average rainfall. Snowfall was similar to last year but still 58% below average and 11th least in 37 years. Retail sales should have performed better than expected. 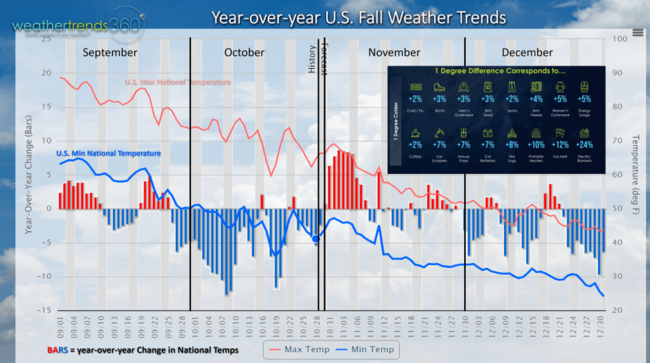 A milder trend for November, some more favorable trends returning mid month with a much more favorable December. December will be the next wave for higher Winter seasonal category sales. 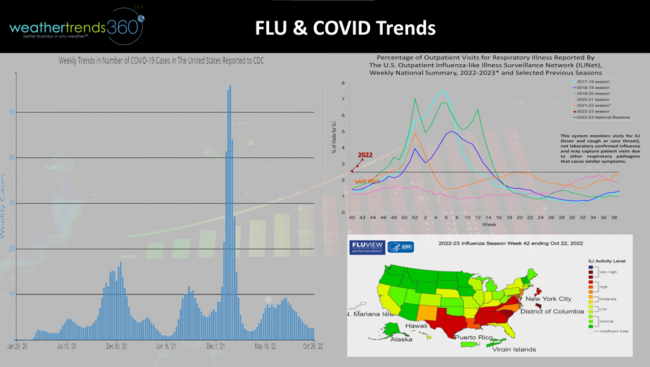 The early cold in October is almost always a catalyst for a fast start to the Flu season and that is certainly the case this year with widespread cases throughout the South and Southeast. COVID remains relatively low with no new strain. WTI expects an early moderate spike in Flu cases in November and then much lower cases in December compared to last year's big spike. This should benefit overall retail sales. 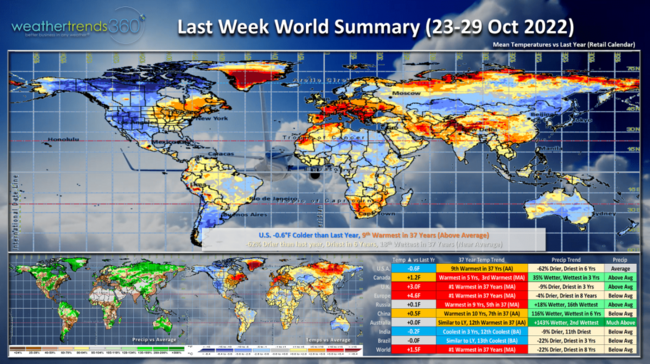 Last week (23-29 October) across the World shows the U.S. trending -0.6F cooler than last year but still 9th warmest of the past 37 years with above average national temperatures. The West was the most favorable spot for an uptick in seasonal category sales while the East finally turned milder after 4-weeks of very cold weather. Rainfall was -62% drier than last year, driest in 6 years but in the middle of the pack trending 18th wettest of the past 37 years nationally. Canada and especially the U.K. and Europe were near record warm suppressing seasonal sales. 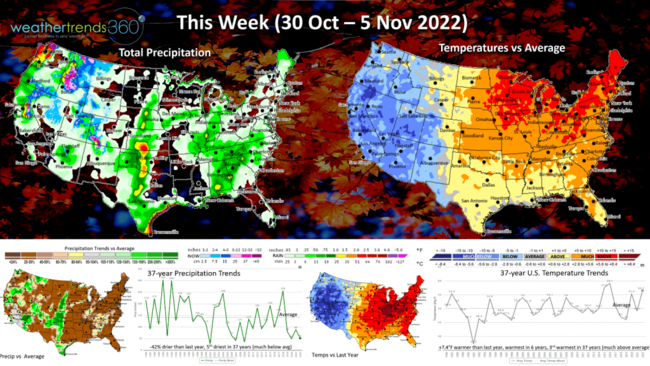 This week (30 Oct - 5 Nov) shows the same general trend of warm to very warm East and cold/snowy West. SOME rain for Northern California, but it's going to take months of heavy rain and snow pack to put a dent in the historic drought. 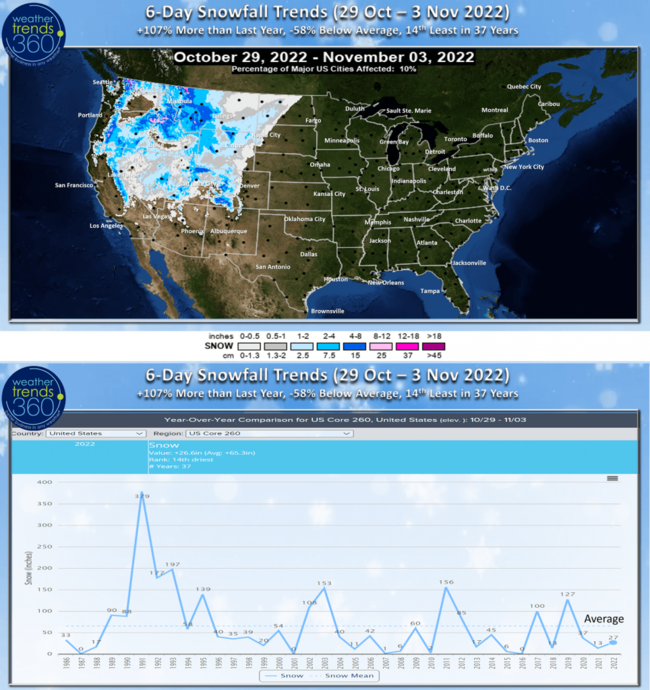 While the 6-day snowfall outlook (29 Oct - 3 Nov) shows some high elevation snow in the West, the U.S. major cities still trend 58% below average and 14th least in 37 years. 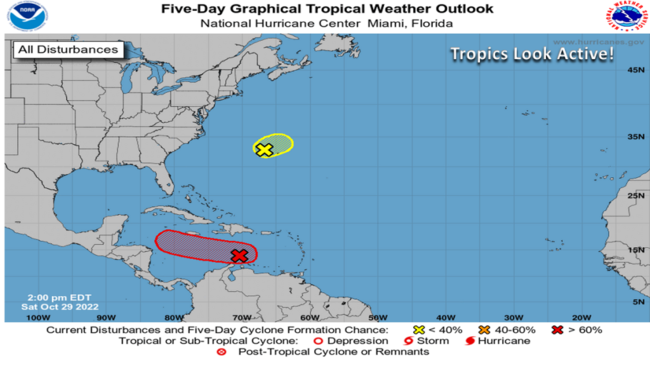 Need to watch the tropics as models are showing MANY tropical waves with the threat a few become Tropical Storms or a Hurricane. Greatest threat right now looks to traverse through the Caribbean. Another system near Bermuda looks to pull Northeast, but several other waves still coming off Africa suggesting a potentially unusually active November. The season typically ends 30 November. 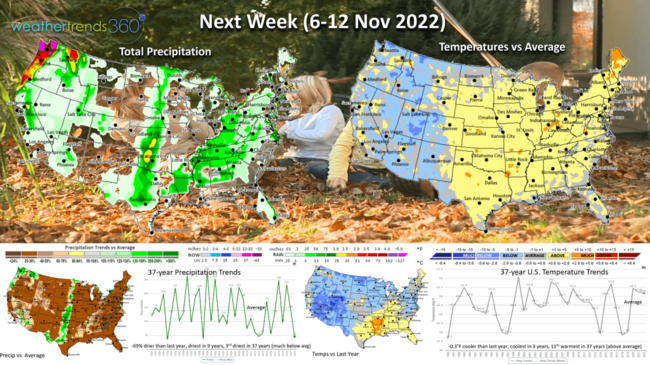 Next week (6-12 Nov) shows some moderating temperatures in the U.S., but the same general theme of cooler West, milder East. National temperatures look to trend -0.3F cooler than last year, coolest in 3 years but still 11th warmest in 37 years. Rainfall -69% drier than last year, driest in 9 years and 3rd driest in 37 years. Some spotty rain in the Plains where it's desperately needed and more rain for the Pacific Northwest into Northern California.

Don't forget Sunday 6 November 2am Daylight Savings Time ends as we "Fall Back" to standard time with an extra hour of sleep. The election day on Tuesday 8 November which looks to be the driest in 15 years, 2nd driest in 37 years and the coolest in 3 years but still 14th warmest of the past 37 years. 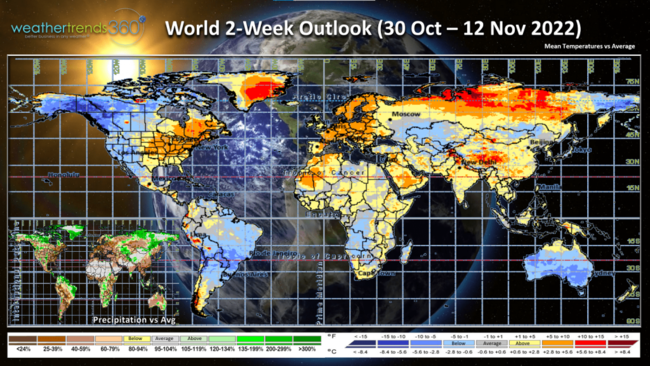 The 2-week World outlook (30 Oct - 12 Nov) shows the same general pattern in North America and Europe the next couple weeks. 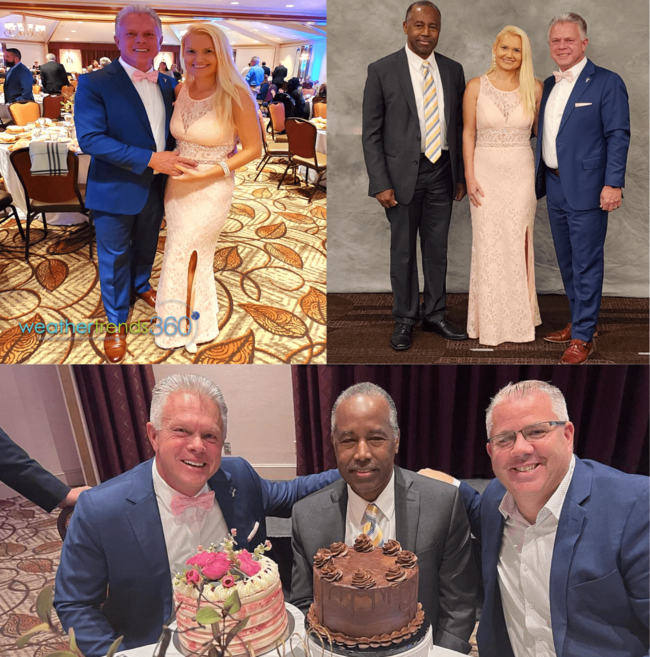 We had the honor of meeting Dr. Ben Carson at a local charity event this past week; his talk was fascinating and uplifting. Not enough time to go into the funny story about THE CAKES! :) No we didn't spill it on him before his talk.