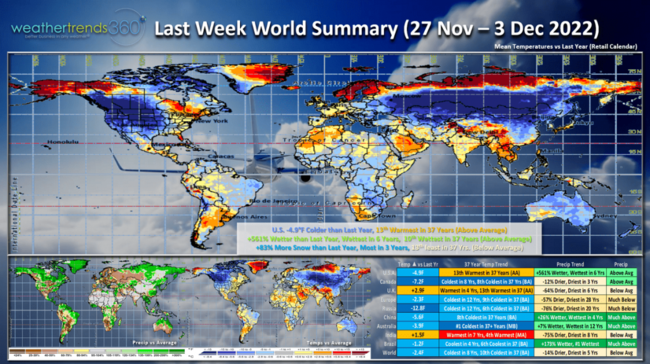 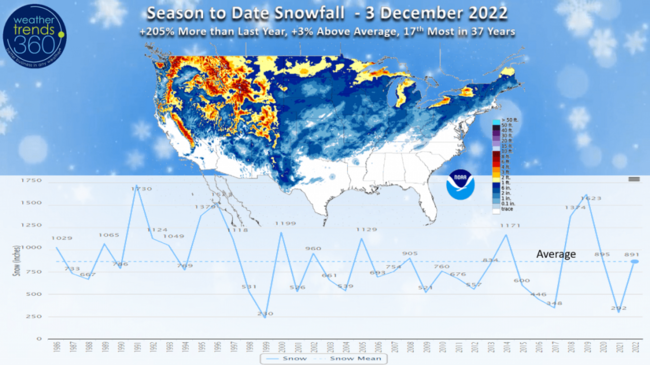 Season-to-date U.S. snowfall is starting to slow a bit, but still trending +205% more than last year, +3% above average and 17th most of the past 37 years. 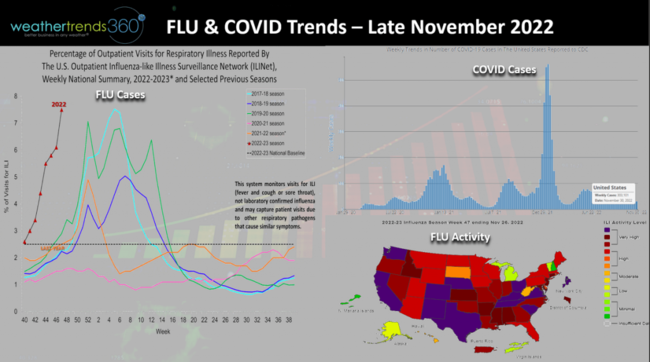 FLU continues to trend the most in 13 years with a very early spike season in the making. Very likely FLU will spike here in early December and then begin to collapse. Last year the Type A FLU spike was around Christmas and then plummeted in January. COVID cases continue to trend well below last year when Omicron led to a huge spike in cases in early January. 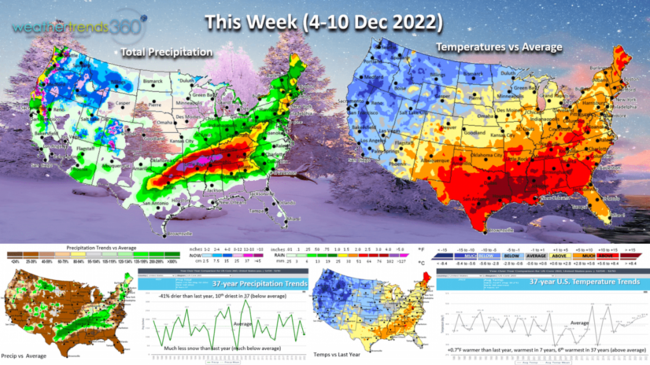 This week (4-10 Dec) shows more of the same with the cold and snow limited to the Western third of the U.S. while the South and East has a big warm up. The U.S. overall looks to trend +0.7F warmer than last year, warmest in 7 years and 6th warmest of the past 37 years. Rainfall trends down -41% vs last year and 10th driest of the past 37 years. Snow is also much below average despite the heavy mountain snows in the West. During the holiday shopping season, less extreme weather is more favorable for overall store traffic and gift sales. 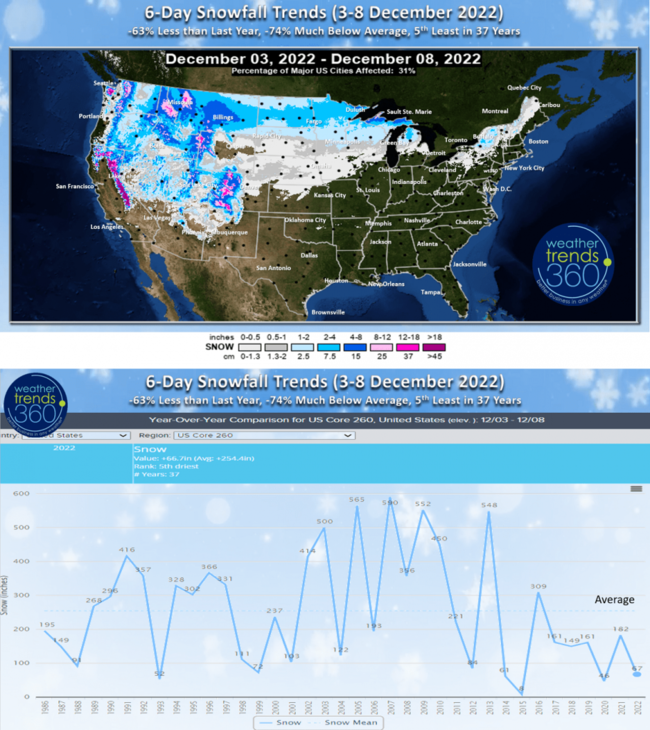 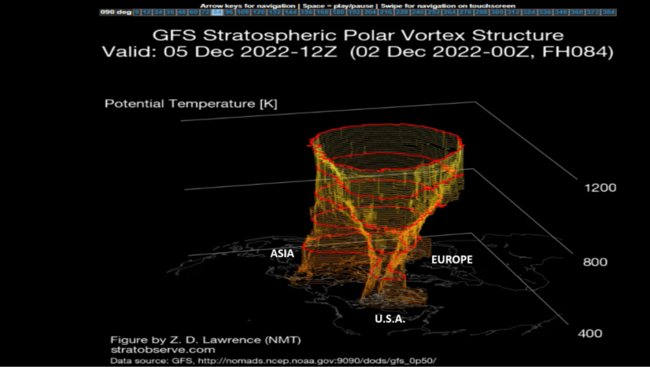 The Polar Vortex is a bit ragged/weaker which has allowed colder weather to invade a lot of areas of the Northern Hemisphere. For now, it appears to favor the Western part of North America. A stronger Polar Vortex typically keeps the cold air bottled up at the North Pole. 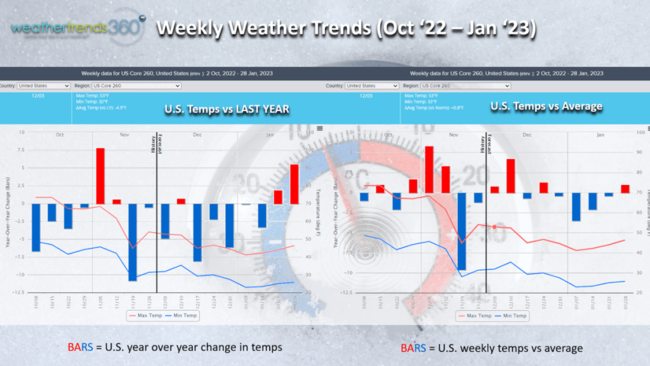 The past couple week have been both colder than last year and below average for the U.S. overall which has certainly benefited retail sales, especially must have seasonal merchandise. With the high inflation environment, consumers clearly buying NEED items as opposed to nice to haves like more expensive electronics. A bit milder trend to start December, but the overall pattern still remains generally colder than last year through middle January. 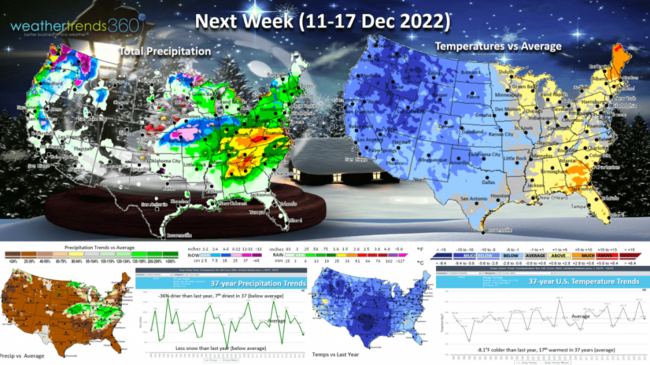 Next week (11-17 Dec) shows most of the country trending much colder than a year ago. U.S. temperatures look to trend -8.1F colder than last year, 17th warmest of the past 37 years so near average overall. The West is still the cold spot, East slightly above average. Rainfall down -36% vs last year and 7th driest of the past 37 years. Drier weather is more favorable for overall store traffic this time of year. 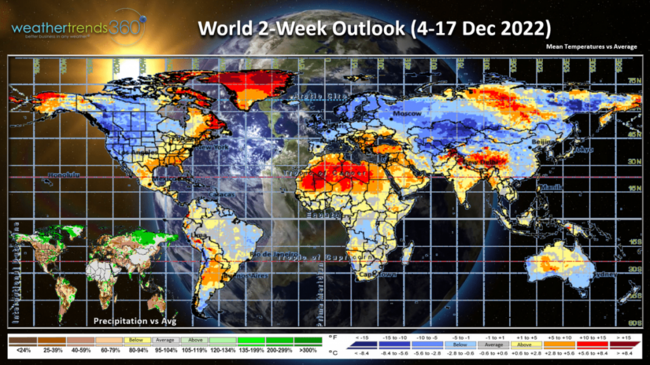 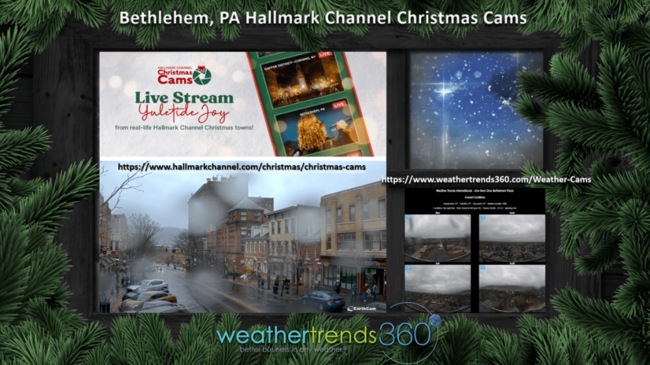 Bethlehem, PA is featured on the Hallmark Channel Christmas Cams just two blocks from our offices. You can watch live here for the 5 cities featured: https://www.hallmarkchannel.com/christmas/christmas-cams

wt360's rooftop 4 panoramic weather cameras provide a much larger view of the weather in all directions: https://www.weathertrends360.com/Weather-Cams

We hope you have a great week ahead, and don't forget to follow us on social media for frequent updates: