Meteorological Summer is about 2/3rds done and the U.S. trends have been hot and dry over the past couple months. For the U.S. overall, the Summer (1 June - 30 July) has trended -0.1F cooler than last year, but still 4th hottest of the past 37 years with much above average National temperatures. Despite the recent heat-wave in the Northwest, the Summer has been trending much cooler, similar to slightly cooler in the Northeast, but much hotter in the South Central U.S. CLICK ON IMAGES FOR A LARGER VIEW. 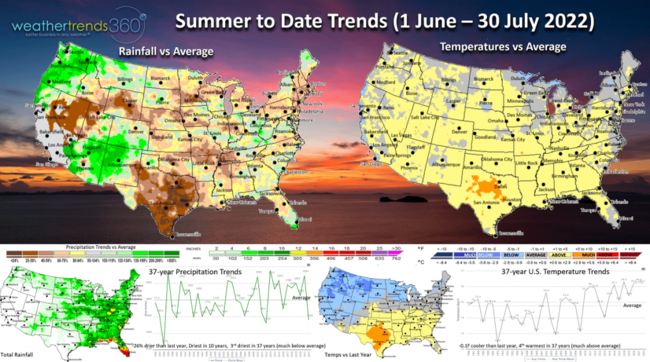 Rainfall has made a wholesale change from a year ago when it was the wettest in 8 years to the driest in 10 years, 3rd driest in 37 years with much below average rainfall. Areas like St. Louis, MO went from 8 weeks with below average rainfall to a flood here last week with 10" of rain. Similar trends in Eastern Kentucky also ravaged by flooding. The wettest spot in the country is the so called "Sunshine State" in South Florida. 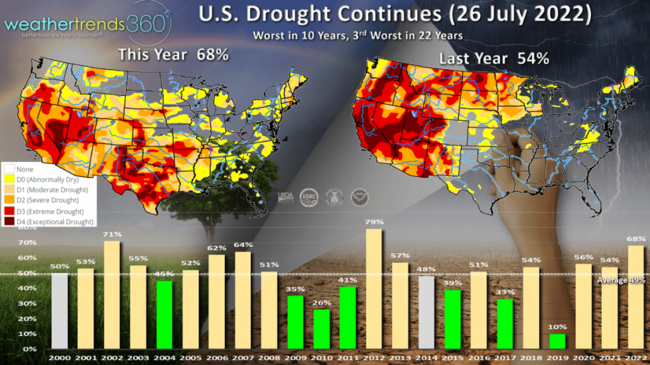 Drought phases continue to hold at 68% of the country in DO-D4 drought status vs 54% last year and 49% average. A big improvement across the Northern Tier with a flip flop in drought to the South, especially Texas. Overall, drought conditions are the worst in 10 years, 3rd worst in 22 years for the U.S. as a whole. 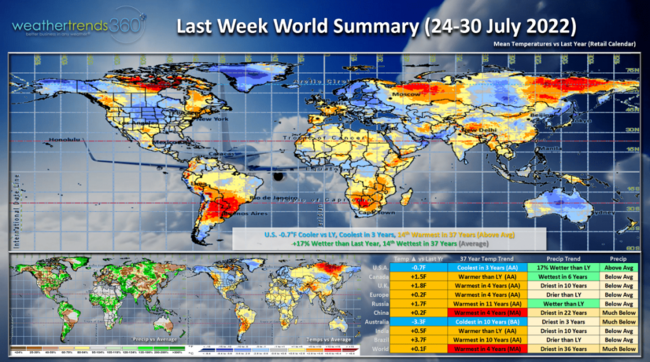 Last Week (24-30 July) across the World showed the U.S. trending -0.7F cooler than a year ago, coolest in 3 years, but still 14th warmest in 37 years. A huge cool down for the Central U.S. was a very welcome but temporary reprieve. Rainfall was +17% wetter than a year ago, 14th wettest of the past 37 years with overall average national rainfall. Canada was the cooler spot, China and Brazil very warm while Australia (Winter) was the coldest in 10 years. 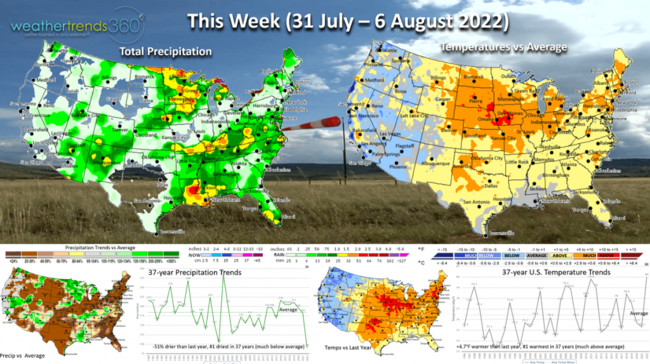 This week (31 July - 6 August) in the U.S. shows heat building back into the Central U.S. with the nation overall trending +4.7F warmer than last year and #1 warmest in 37 years. These are very negative trends as we enter the Back2School season that typically fares better with cold and wet conditions. Rainfall down 51% vs a year ago, making it the #1 driest in over 37 years. Need to start watching the Tropics as the MJO phase 2 cycle is becoming a bit more favorable for tropical development close into the U.S. These hot/dry trends are favorable for consumable hot seasonal categories like cold beverages, pool chemicals, auto front end parts and fruit and vegetable grocery items. 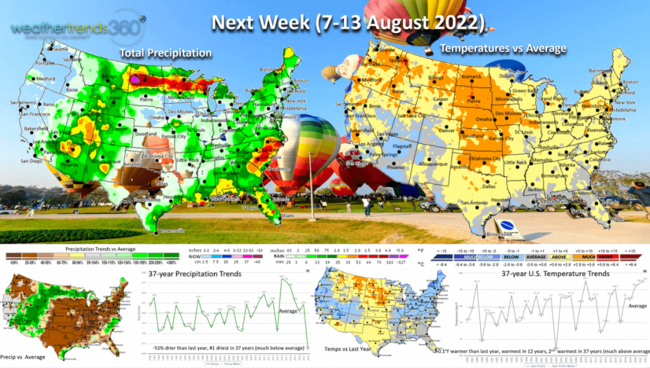 Next week (7-13 August) remains hot and dry with the U.S. trending +0.1F warmer than a year ago, warmest in 12 years and 2nd warmest in 37 years with much above average national temperatures. Despite the warm up, the Northeast - Ohio Valley is still cooler than a year ago as is parts of the West. Rainfall again #1 driest and 51% less than a year ago. Again, need to start watching the tropics as we enter the core August - October season. 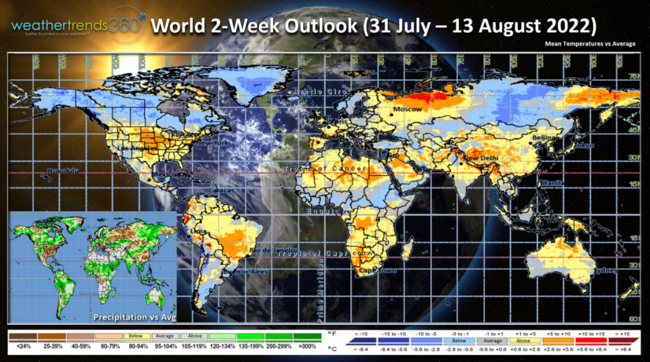 The 2-week World Outlook (31 July - 13 August) shows cooler than average conditions from Alaska, much of Canada, Greenland and Siberia. Not as extreme across Europe, but much above average in the U.S.

P.S. For clients, we sent out our Summer newsletter to you via email last week Friday morning, be sure to check it out.