For our Ag/farmer clients check your email for our video update on the entire 2023 season for the U.S. and World (sent Friday am). CLICK ON IMAGES FOR A LARGER VIEW. 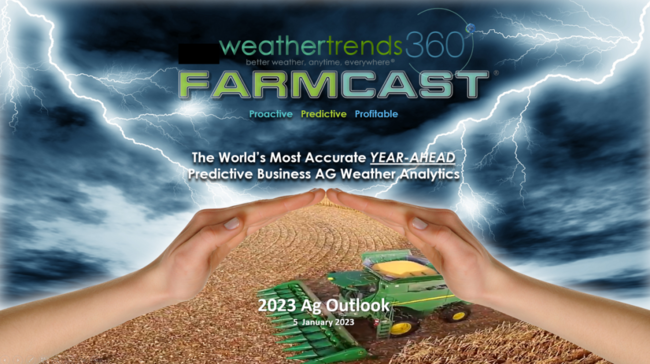 The big theme for 2023 is the collapse of this 3-year La Niña cycle with a transition toward weak El Niño by Summer. This will bring a wholesale change to the global weather pattern, in some respects it's already started. 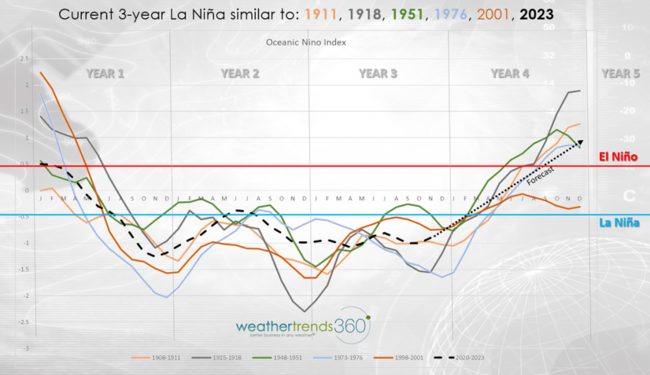 This will have sweeping changes to the global weather pattern over the next couple of years with droughts more likely in Asia to Australia and flooding more likely in the Americas. With La Nina it's more common to have sinking air over North and South America which creates droughts as we've seen, with widespread drought in the U.S. and rising air and ample rainfall in Asia to Australia. This flips under an El Niño scenario. 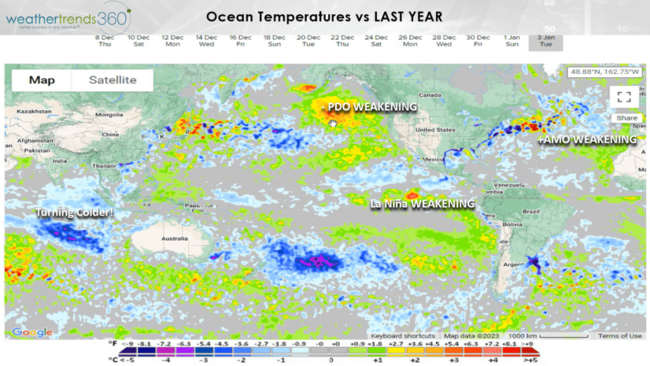 Looking at the Ocean temperatures compared to last year already shows signs of the pattern evolution. We can see the colder waters in the Eastern Indian Ocean and warmer waters emerging in the East Pacific. As minor as this sounds, it's a significant driver of the World's weather. 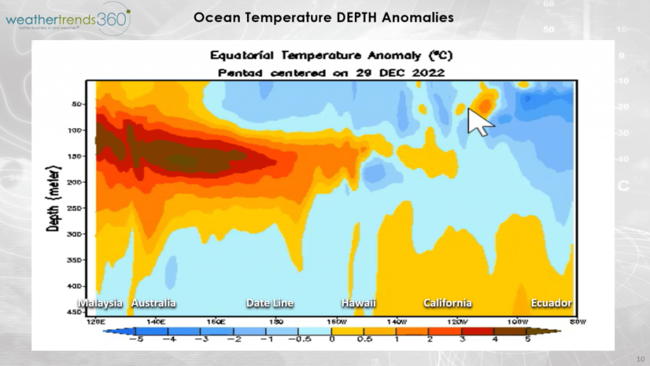 The pattern change is also evident below the surface of the Equatorial Pacific Ocean with the very cold waters in the Eastern Pacific now showing bigger pockets of above average temperatures - sign of El Niño. 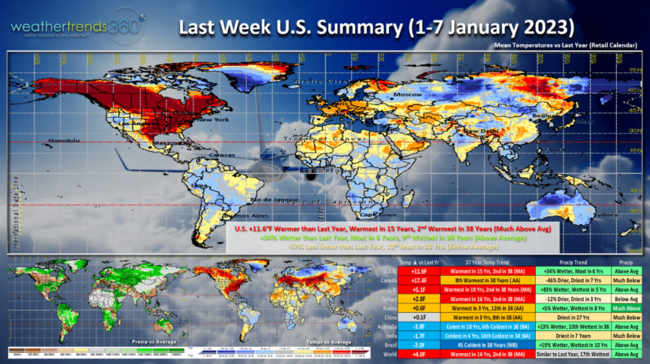 A recap of last week (1-7 January 2023) around the World shows the near record warmth in the U.S. with national temperatures trending a very significant +11.6F warmer than last year, warmest in 15 years and 2nd warmest of the past 38 years. This is good for overall store traffic at restaurants, outdoor construction and the overall economy. Rainfall was up +34% vs last year, most in 6 years and 9th most of the past 38 with very heavy rain once again in California! The drought in California looks to be completely erased in 2023. Snowfall nationally was down -57% vs last year and 10th least of the past 38 years. Similar very warm trends in Canada, U.K. and Europe. Australia continues their very cool Summer trends - coldest in 18 years. 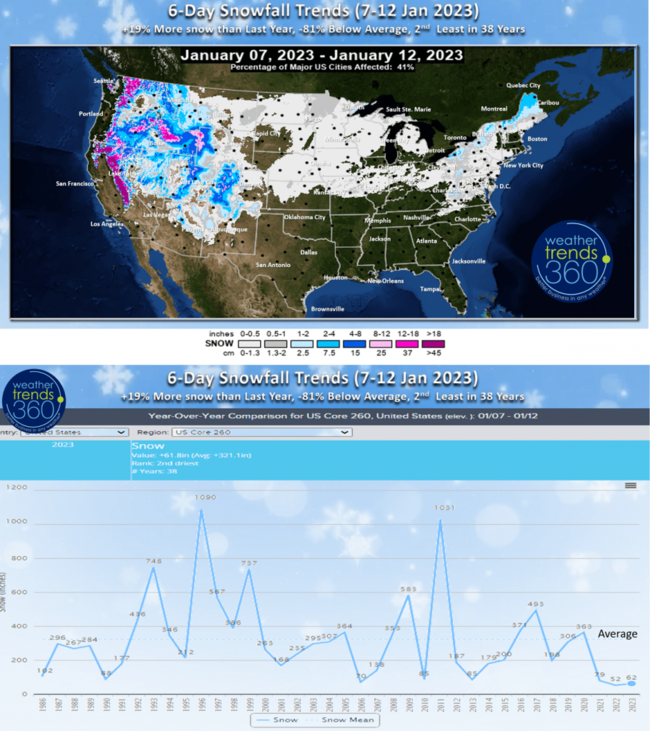 Despite the exceptional snow in the Western high mountains, U.S. season to date snowfall is +31% more than a year ago, most in 3 years but now -6% BELOW AVERAGE and 15th least of the past 38 years. The big snow winners continue to be out West and downwind of the Eastern Great Lakes. 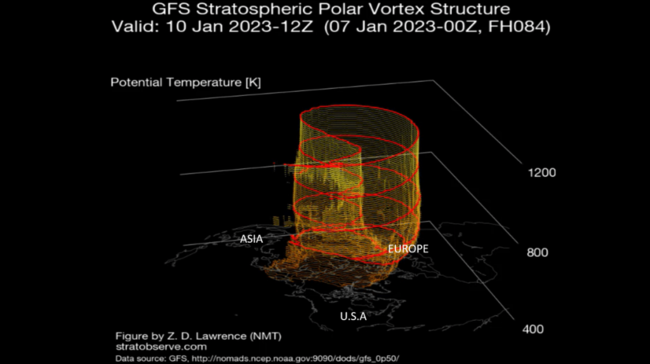 The Polar Vortex remains strong and generally symmetrical which helps to keep the Arctic air bottled in the Arctic allowing much of the Northern Hemisphere to have much above average temperatures. Some indication of minor weakening late January which could allow for brief intrusions of colder weather. 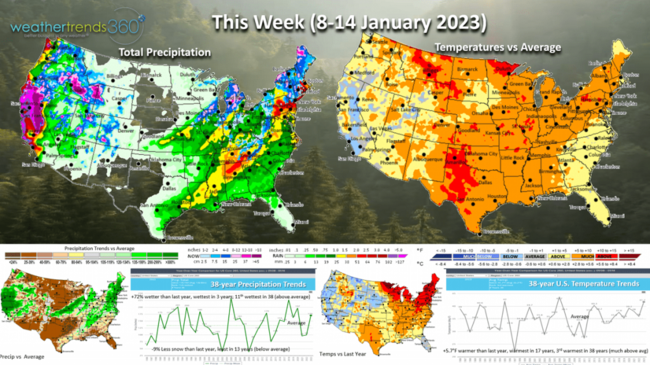 This week (8-14 Jan) shows more of the same with the U.S. trending +5.7F warmer than last year, warmest in 17 years and 3rd warmest of the past 38 years. Rainfall up +72% over last year, wettest in 3 years and 11th wettest of the past 38 years. Another sign that the drought cycle across the U.S. is STARTING to transition to a much wetter pattern for 2023. Snowfall likely to be -9% less than a year ago, least in 13 years and well below average. The East Coast and Northeast has escaped the bigger snows, but with these bigger West Coast storms traversing the U.S. there is risk that one will phase just right despite marginal temperatures to bring a snow threat for the snow deprived Northeast.

The 6-day snowfall outlook doesn't show anything in the immediate timeframe of any bigger snows in the East. 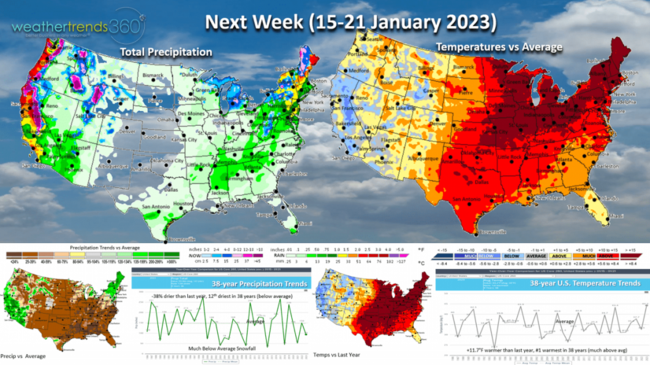 Next week (15-21 January) shows the status quo continues with much above average temperatures, #1 warmest in over 38 years, continuing in the East, cooler in pockets out West. This warmer pattern is a benefit to consumers heating costs which will trend much lower than a year ago and much lower than the much higher costs in December with the major Arctic blast. This will ultimately lead to some additional discretionary income helping the overall economy, a bit. Rain and snow are down again favoring outdoor construction and overall store traffic. 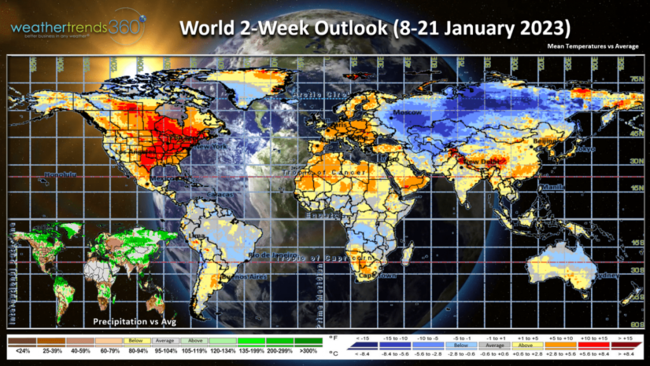 The 2-week World outlook (8-21 Jan) shows the exceptional warmth in North America, very warm in Europe but very cold across Russia-Siberia - where the Polar Vortex is currently camped out.