Business
Written by Krissy Klinger
It feels like forever since we had a decent snowstorm in the Mid-Atlantic. Last winter brought some of the lowest snowfall totals in over 30 years to the region, including Philadelphia, PA which saw a paltry 0.3'' for the ENTIRE season. That said, we don't want to get the hopes of you snow lovers up too high for a good old-fashioned winter storm, but as Lloyd Christmas said in Dumb and Dumber, we're telling you "there's a chance". Weathertrends360 is tracking a storm that is forecast to move across the Mid-Atlantic and Northeast during the middle part of next week (December 16th-17th time frame). 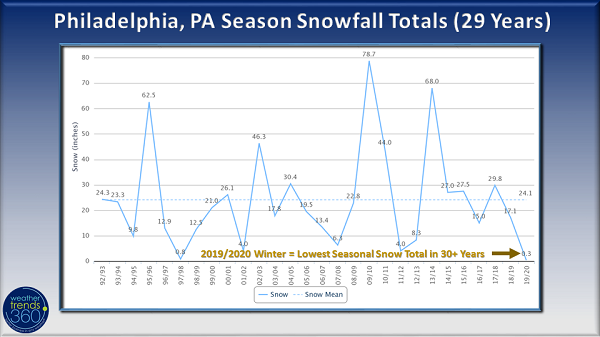 Confidence is growing for snow to fall somewhere from the Ohio Valley to the Appalachians, Mid-Atlantic and Northeast mid-next week. As is often the case with these types of storms, it's far too early to pinpoint exact snow amounts or where the rain/snow line will set up, but for snow lovers, it's been encouraging to see the forecast models consistently indicate a storm threat for this time frame. Details on the storm will become clearer over the next several days.

The right ingredients certainly seem to be coming together for a winter storm. An area of high pressure over Canada will help to funnel colder air across the region, after what will be a rather mild mid-December weekend coming up. The high will help to keep the storm closer to the coast as opposed to cutting up the middle of the Northeast which would allow warmer air from the Atlantic to push in across the region. Of course, the location of the Canadian high and the actual storm track will be the big deciding factors for snowfall. Just a shift of 50 miles east or west will alter the outcome. A storm farther inland (west) brings snow farther inland and rain to the coast while a storm closer to the coast increases the chance for snow in the heavily populated I-95 corridor. But, too far east and the Northeast just gets brushed by the storm. The speed of the storm will also play a role as a faster moving storm will put down less precipitation than a slower storm. 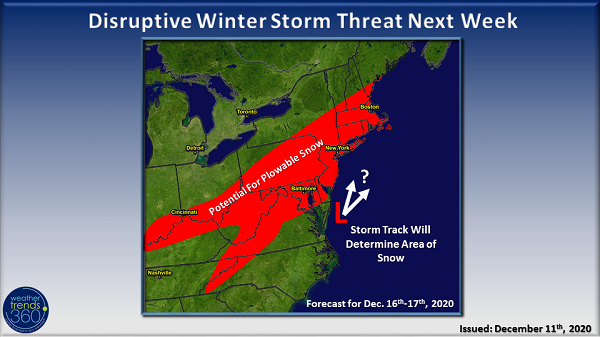 At this time we expect:

For retailers, the storm may disrupt store traffic during the middle portion of next week just as some retailers will be beyond their deadline to have online purchases shipped before Christmas making in-store traffic more important for holiday sales. On the bright side, a mid-week storm is much more preferable than a weekend storm, especially considering that next weekend is the final weekend before Christmas.

Interest for snow removal categories like snow blowers, shovels, rock salt, and even snow toys may see a surge early in the week. Don't be surprised to see especially high demand in suburban areas as urban flight since the start of the Coronavirus Pandemic likely has many new residents in the area that are unprepared with the proper snow-clearing tools.

Stay tuned to our Facebook page for updates and, as always, your local forecast can be found on Weathertrends360.com.